Jessica Jonassen will be a safe option as vice-captain due to her batting position and number of overs she bowls.

The 11th match of the 2019 Women’s Big Bash League (WBBL) will be played between Brisbane Heat and Perth Scorchers at the Allan Border Field in Brisbane.

The defending champions Brisbane Heat had a mixed start to the tournament as they thumped Sydney Sixers, their fellow finalists of the 2018/19 season by a huge 92-run margin. However, the other Sydney team, the Sydney Thunder chased down their total of 150/9 with nine balls to spare. The batting effort that was seen in the first game went missing in the second match as they ended up with a below-par score.

They will now face the Perth Scorchers in their first home match at the Allan Border Field. The Scorchers’ campaign began to a tough loss to the Melbourne Renegades. Despite an unbeaten half-century from Natalie Sciver, the Scorchers posted only 132/5. The total was too less to defend but Perth team tried their best by pushing the game to the final over by taking wickets.

No threat from rain is expected at the Allan Border Field on Saturday where the conditions are expected to hot and sunny.

The Allan Border Field has witnessed marginally low totals compared to the other venues in the BBL. However, since the game on Saturday will be the first of the season, we might see totals up to 150. Usually, the chasing teams dominate where the first innings totals don’t exceed 130.

Meg Lanning and Beth Mooney are quite consistent in this competition and this is why the duo are placed at 10.5 credits in the fantasy team. Heather Graham was quite unlucky not to pick a wicket in the last match but has impressive numbers in the last edition. She has bagged 22 wickets from 14 matches in and also scored 161 runs at an average of 16.1. Amelia Kerr could run through the middle and lower order if the Scorchers’ top order doesn’t last long.

Jessica Jonassen will be a safe option as vice-captain due to her batting position and number of overs she bowls. 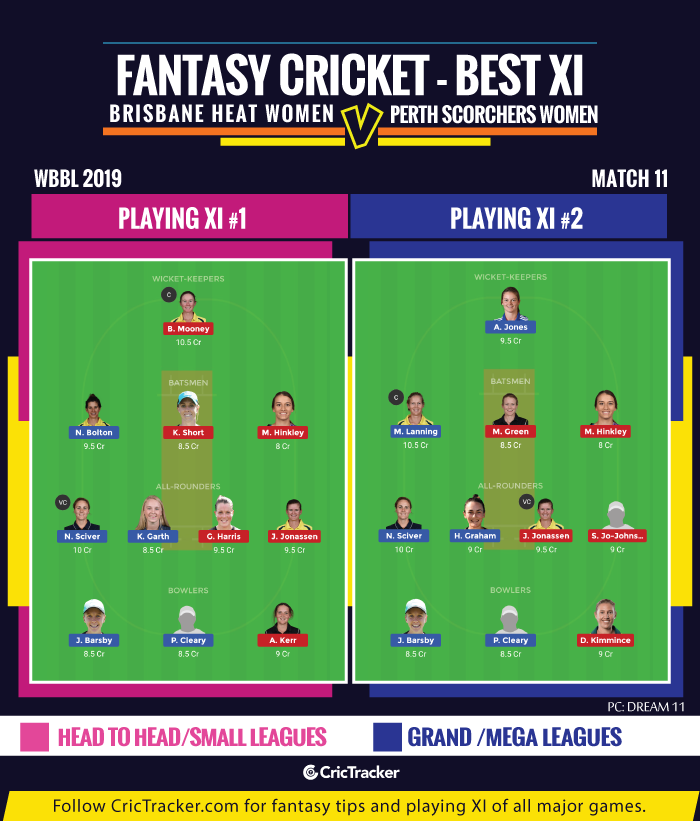 Lack of players with 8 credits is going to play an impact in the fantasy team selection.  As many as seven players value 9.5 credits and more including the likes of Meg Lanning and Beth Mooney of 10.5 credits. Only one of those two players will be able to be part of a good fantasy side. Few things to be noted while selecting a fantasy team are Nicole Bolton bowling at least two overs while Natalie Sciver’s bowling prowess not being used.

The Brisbane Heat are expected to register their 2nd win in three matches.