There are a lot of unknown names and inconsistent players. It would be wise to not depend on any specific player and pick a balanced Dream11 Fantasy team from both the teams.

The 14th match of the 2019 Women’s Big Bash League (WBBL) will be played between Sydney Thunder and Melbourne Stars at the Bankstown Oval in Sydney.

The 14th match of the ongoing Women’s Big Bash League will see the Sydney Thunder and Melbourne Stars facing off in Sydney. The Stars were thumped by the Sydney Sixers on Saturday and they are yet to win a single game in three attempts this season. The team led by Elyse Villani is struggling for consistency with bat and ball both and will need a clinical effort to even go past the Thunder.

The Thunder, on the other hand, came back strongly to beat the defending champions Brisbane Heat after losing the season opener to the Sixers. While the skipper Rachel Haynes is not in great nick, the likes of Alex Blackwell and the teenager Phoebe Litchfield have put their hand up for the team in tough times. The Thunder’s bowling also looks sorted but they need to perform consistently to stay in the hunt for the semis.

Sydney will experience a cloudy day to start with on Sunday but then by the time the match starts, the sun will be out. It will be bright and sunny for the action to take place at the venue. The temperature will hover around 21-23 Degrees Celsius during the match according to AccuWeather.

Both these teams played at the same venue in the previous WBBL season where the Thunder won the close game by five runs. It was a low-scoring affair and the spinners and the bowlers with more variations were successful on this surface. The team winning the toss expected to bowl first.

Players from both the teams are struggling for consistency. For the Thunder, Priest, Haynes and Blackwell continue to be crucial with the bat. Phoebe Litchfield has been eye-catching but she should look to score runs at a quick rate. These players should be picked in your Dream11 Fantasy.

For the Stars, their skipper Elyse Villani and Lee should bat long after which Migon du Preez at three can score runs. Osborne is also a brilliant cricketer and her all-round skills are important for the team. 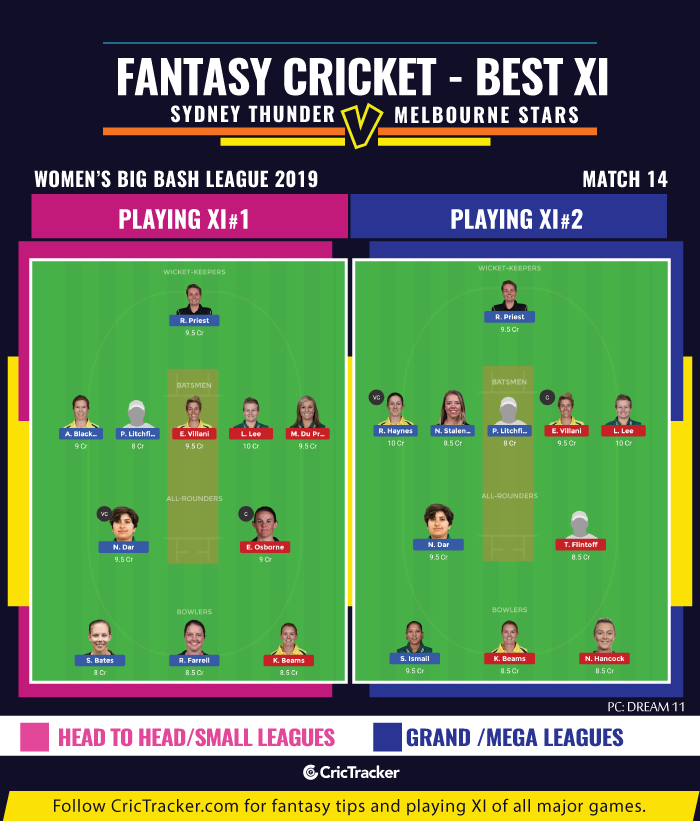 There are a lot of unknown names and inconsistent players. It would be wise to not depend on any specific player and pick a balanced Dream11 Fantasy team from both the teams. It is also a risky match to play as anyone can perform well on their day.

Melbourne Stars are expected to register their first win of the season.