Ellyse Perry continues to be a crucial player to be made as captain or vice-captain.

The 17th match of the 2019 Women’s Big Bash League (WBBL) will be played between and Melbourne Renegades and Sydney Sixers at the W.A.C.A Ground in Perth.

The game will be live on Sony Ten 3 and Sony Ten 3 HD in India. Live streaming available on Sony Liv.

Melbourne Renegades will take on Sydney Sixers on Saturday at the WACA Ground where they lost the last-ball thriller against the hosts Perth Scorchers on Friday. In the game continuously troubled by the rain, Danielle Wyatt scored an unbeaten 51-ball 74 to help the Renegades finish on 134/1 in 15 overs. The Scorchers chased down the revised target of 73 in the restricted seven overs on the last ball.

With three defeats from five matches, the Renegades look to gain full points against Sydney Sixers. The Ellyse Perry-led team hasn’t played to his potential winning two of the three matches. They lost to defending champions Brisbane Heat by a huge 92-run margin which affected their NRR and placed them at No.6 in the table. They will be playing twice at the WACA Ground this weekend.

The game on Friday at the W.A.C.A ground was interrupted by constant showers. However, the game to start at 12:10 PM local is likely to have only cloud cover.

The Friday’s game was played on a track with green tinge which is likely to be removed for the Saturday matches. The Scorchers and Renegades were involved in a high-scoring game repeatedly interrupted by showers. However, it could be on the slower side in the second innings depending on the weather.

Claire Koski suffered an injury while fielding in the last over of the match on Friday.

Danielle Wyatt showed her class with an unbeaten 74 against the Scorchers. It was her 2nd fifty in this season from 5 matches. Georgia Wareham didn’t have greatest of tournaments to start off but picked up two wickets in two balls on Friday. Jess Duffin has three 25+ scores including a fifty this season but didn’t get chance to bat. Dane Van Niekerk marked her comeback with two wickets while her partner Marizanne Kapp bagged a hat-trick.

Ellyse Perry continues to be a crucial player to be made as captain or vice-captain. 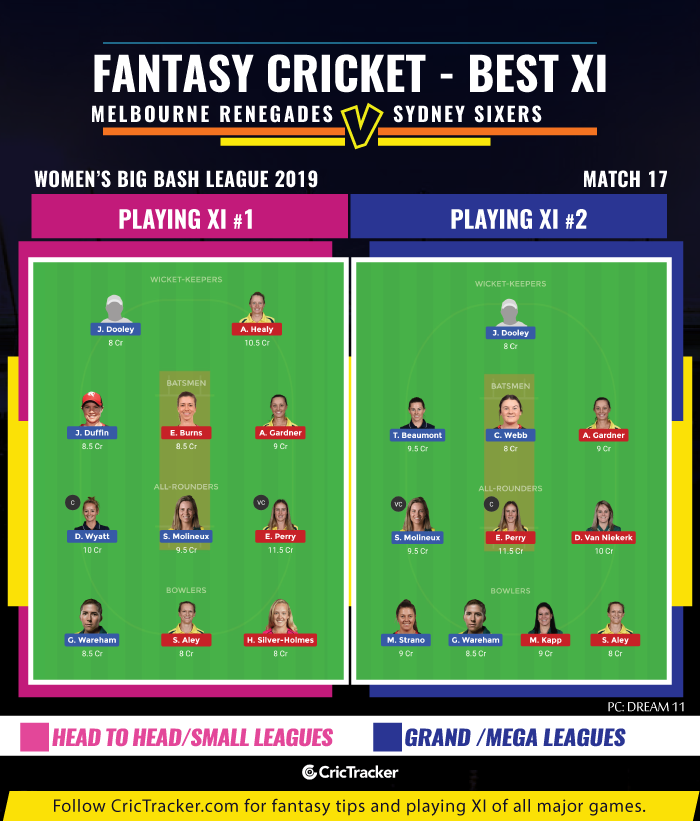 There are few bowlers in the Sixers’ camp who can cause trouble to Danielle Wyatt. In all likelihood, she is expected to end up with a big score like on Friday or get dismissed for a single-digit score.

Sydney Sixers are expected to record their 2nd straight win.