It is extremely difficult to pick Bates, Devine, Mooney and Jonassen together in the team.

The 20th match of the 2019 Women’s Big Bash League (WBBL) will be played between Brisbane Heat and Adelaide Strikers at Harrup Park in Mackay.

The Adelaide Strikers thumped the hosts Brisbane Heat in the first face-off at the venue. Chasing 140, the Strikers lost only two wickets and cantered to victory with one over in hand. Both the sides will face-off yet again in less than 18 overs at the same venue again. The Heat will now be eager to get back to the winning ways consistently. They have lost three out of their last four matches.

The Strikers, on the other hand, strengthened their top spot and are currently at eight points after five matches. The defending champions, however, slipped to the fifth position after losing their third match of the season. They will have to soon get back to winning matches in the near future to avoid getting knocked out.

Mackay will experience in the midnight but things will get clear on Sunday morning and the sun will be out by the time the match starts. The temperature will hover around 26-27 Degrees Celsius according to AccuWeather and there is no chance of rain during the match.

The surface for Saturday’s game was good for chasing. But still, the Strikers took 19 overs to chase down 140. The pitch was on the slower side and expect the same on Sunday as well. Expect the team winning the toss to bowl first.

Going by the performance on Saturday, Beth Mooney, Sophie Devine and Suzie Bates are the top picks for this match. These players should be picked in your Dream11 Fantasy team. Bridget Patterson also did well with the bat. And do not ignore Jess Jonassen. She had an off day and will comeback strongly. 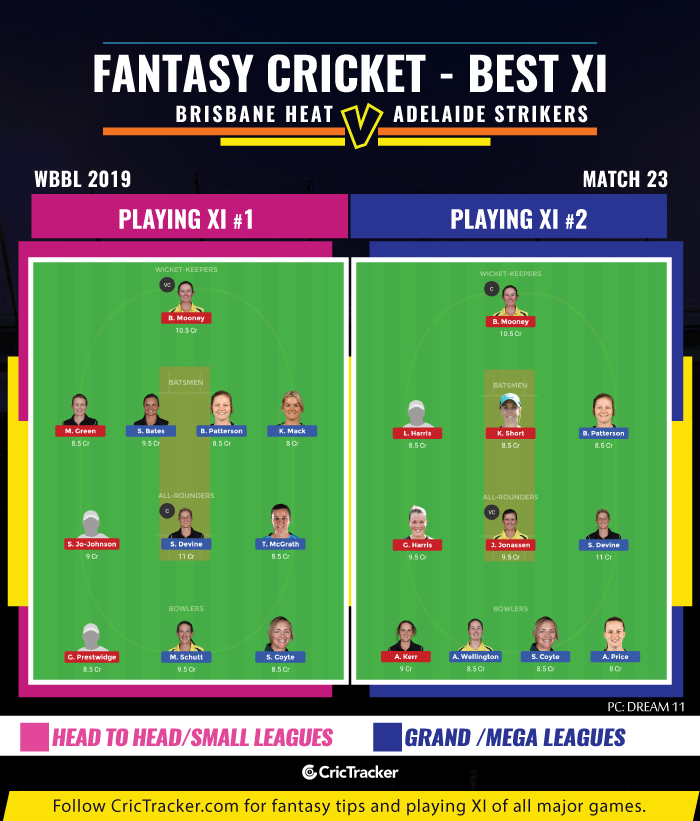 It is extremely difficult to pick Bates, Devine, Mooney and Jonassen together in the team. For that to happen, you will have to pick Mikayla Hinkley who literally does nothing. She bats at number 10 and doesn’t bowl as well which might cost you if any of the top players have an off-day which happened with Jonassen. So it would be wise to drop either of the aforementioned four players and prepare a balanced team which will win you the contests.

Brisbane Heat is expected to win this match.