Beth Mooney will be a safe option as a multiplier as she averages 86 with the bat in this tournament.

The 26th match of the 2019 Women’s Big Bash League (WBBL) will be played between Sydney Sixers and Brisbane Heat at the North Sydney Oval.

The game will be live on Sony ESPN and Sony ESPN HD in India. Live streaming available on Sony Liv.

Just like every other WBBL season, the Sydney Sixers started off in style with four wins from the five matches they played. In the previous game against Melbourne Stars, the ace opening pair of Alyssa Healy and Ellyse Perry batted through 20 overs scoring 199 without losing a wicket. They won the match by 45 runs to complete a hat-trick of wins.

This hat-trick came after a record defeat to Brisbane Heat to whom the Sixers lost in the previous edition final. The Heat will be their rivals on Saturday when they played at the North Sydney Oval in the afternoon. The Brisbane Heat have been heavily relying on Beth Mooney. The opening batter has struck four fifties from six matches this season and the Heat have won three of them.

This game is unlikely to get affected by the weather as a sunny weather is expected throughout Saturday with periodic clouds.

The North Sydney Oval is probably the best batting surface to have hosted Women’s matches. Earlier during the T20I series against Sri Lanka Women, the Australia Women have amassed two 200+ totals and two individual centuries. Chasing down totals around 160 can be seen regularly here.

Beth Mooney scored four fifties in six matches in this WBBL and scored a brilliant ton at the North Sydney Oval earlier this season. Ellyse Perry averages 59 in T20s with the bat at this venue. She has scored an unbeaten century and four fifties all in only 13 T20 innings. Sarah Aley has taken wickets regularly and could save credits for big names. She costs only 8 credits and is currently the joint leading wicket-taker for the Sixers in this tournament.

Beth Mooney will be a safe option as a multiplier as she averages 86 with the bat in this tournament. 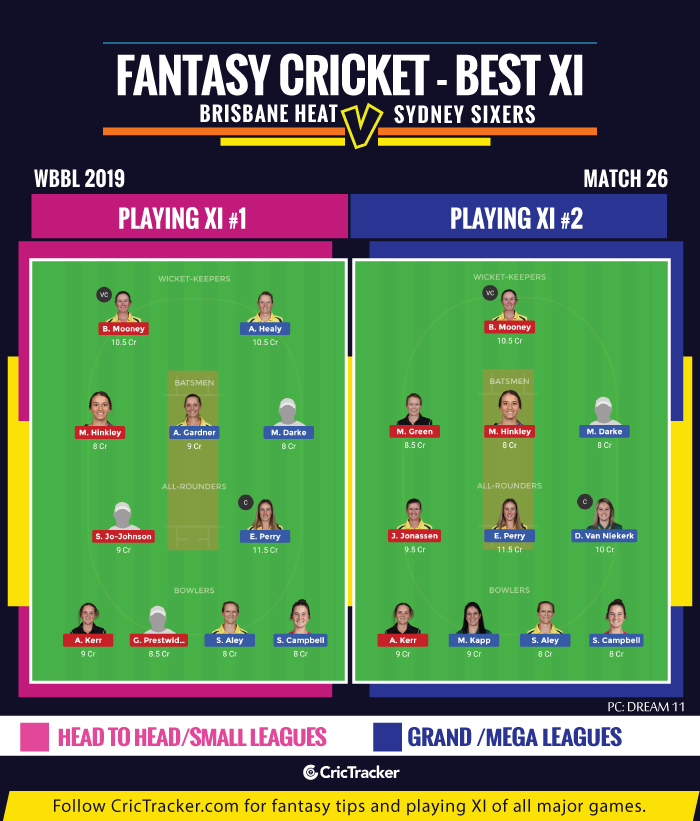 Alyssa Healy is going through the form of her life with the bat but that is not enough to make her captain. Beth Mooney is scoring a fifty almost every match while Ellyse Perry and Dan Van Niekerk are quite consistent at making most with their all-round ability. Unless one can correctly predict a big knock from Healy, making her captain ahead of the other doesn’t justify.

The Sydney Sixers are expected to settle the scores with Brisbane Heat.