Beth Mooney hasn't played well in the last few matches. She is due for a big knock and can be made Captain of your Dream11 Fantasy team in grand leagues.

The 42nd match of the 2019 Women’s Big Bash League (WBBL) will be played between Hobart Hurricanes and Brisbane Heat at the Bellerive Oval in Hobart.

If the ongoing WBBL season is concerned, this encounter between the Hobart Hurricanes and Brisbane Heat is a complete mismatch. The defending champions are playing their best cricket again and are at the top of the points table at the moment. The team led by Kirby Short has won eight out of 11 matches so far and look set to make it to the knockouts again.

But the same cannot be said of the Hobart Hurricanes. They have struggled throughout the season registering only three wins from 10 matches. Having said that, they are coming off a stunning victory over the Sydney Sixers and will be running high on confidence. Though it would be a tough task for them to overcome the Heat challenge.

It will be cloudy for the whole day in Hobart but there is no chance of rain at all. According to AccuWeather, the clouds will be hovering over the Bellerive Oval even at 7 PM. The temperature is expected to hover around 15-17 Degrees Celsius during the match.

This is the first match of this season at the Bellerive Oval in Hobart. There is no idea on how the surface will behave which might lead to the team winning the toss to bowl first. If the recent trend is considered, the score around 140-150 should be par.

Beth Mooney and Jess Jonassen are a must with the way they have been playing in this WBBL season. While the former has rocked with the bat, Jonassen has lit up the stage with her all-round skills. Even Georgia Prestwidge is a good bowler and can be picked in your Dream11 Fantasy team. For the Hurricanes, Knight and Carey are crucial players. 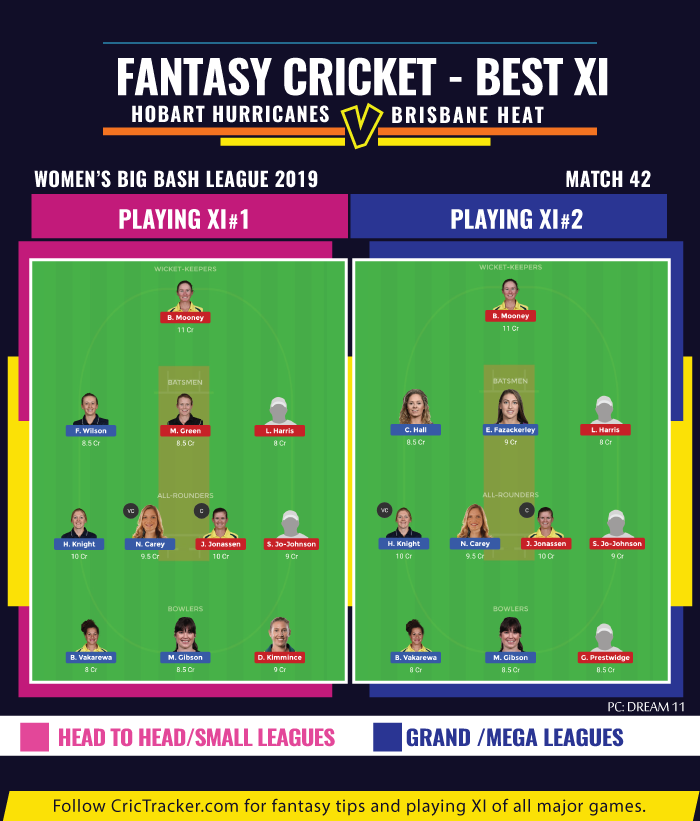 Beth Mooney hasn’t played well in the last few matches. She is due for a big knock and can be made Captain of your Dream11 Fantasy team in grand leagues.