Perth Scorchers are currently ranked third in the WBBL 2019.

The 56th match of the WBBL 2019 between Hobart Hurricanes and Perth Scorchers will be played at the Lilac Hill Park in Perth.

Perth Scorchers are currently ranked third in the WBBL 2019 league table and have qualified for the semi-finals. They hold a big chance to grab the second position towards the end of the league stage. This will be their second meeting with Hobart Hurricanes in a span of 24 hours. In the previous game, Hurricanes shocked Scorchers by defeating them. Hence, in the upcoming match, they will look to avenge for the previous loss against the same opponent.

Hurricanes have already been ruled but they gave some convincing performances in the previous match. Erin Fazackerley scored a brilliant fifty that helped her side to outclass Scorchers. Moreover, Tayla Vlaeminck, Nicola Carey and Maisy Gibson also did a commendable job with the ball. So, they will look to end their WBBL 2019 campaign with a win in their last league match.

It will be a sunny day with the sun shining outright during the game time. However, the weather is expected to range between 31-33 Degree Celsius according to Accuweather.

It is expected to be a relatively high scoring game that will go in favour of the batters. The fast bowlers will get enough assistance from the track that will help them to get some wickets in the match. And, the toss will a crucial role and the team winning the toss will most likely to go for bowling first.

Meg Lanning is moving in red hot form with the bat in WBBL 2019. She has amassed 429 runs in 13 games with four half-centuries. So, she will be a crucial pick for any Dream11 Fantasy Side.

Belinda Vakarewais the leading wicket-taker in the ongoing tournament with 20 wickets. So, is expected to replicate her good bowling form in the Hurricane’s last league match as well. 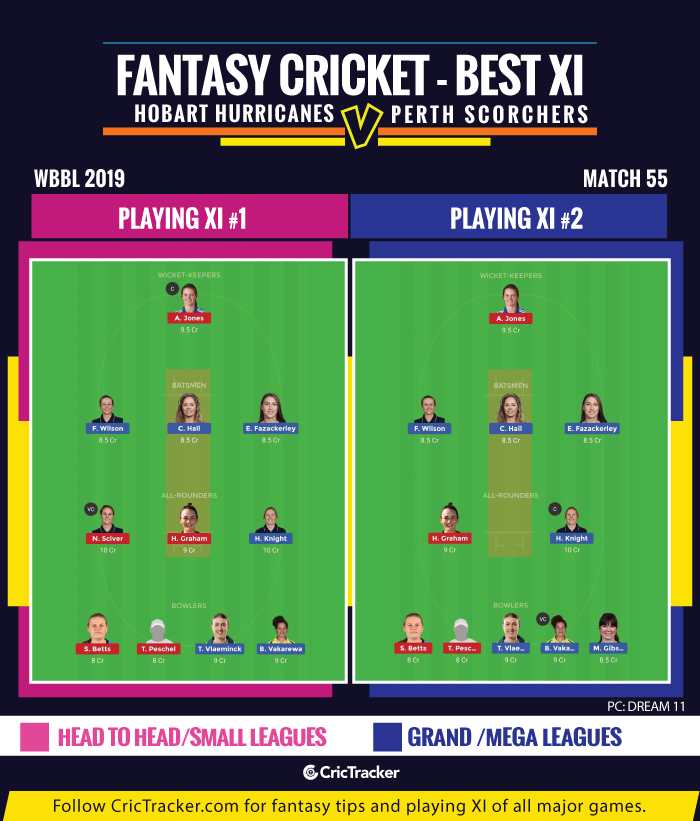 Natalie Sciver has done well for her side but lacks in performing with consistency. However, her ability to perform in both departments makes her important for any fantasy side. She is still due to give a breakthrough performance in the tournament for her side. Sciver is a risky pick but will be worth for any Grand League Side.

Perth Scorchers are the favourites to win this match.