Devika Vaidya could be handy as captain in case of the shortened game.

The arch-rivals India Emerging Women and Pakistan Emerging Women will face off in their respective last league match on Friday. The two teams were considered to be the strongest among the four and are expected to face off in the final again. However, continuous rains in Colombo meant the two teams have to fight in a virtual semi-final. Their matches against Sri Lanka and Bangladesh were washed out without even a toss. Both the teams have players who are coming off good performances.

Scattered thunderstorms with rain are expected at the Thurstan Grounds once again. The weather forecast will remain through the day and will be tough to get a game again.

Thurstan Grounds in Colombo is expected to produce medium totals. If the rain permits play, we might see totals around 200 possibly getting chased down. The pacers are likely to enjoy help from the pitch due to the rains over the last couple of days.

The trio of Devika Vaidya, Tanushree Sarkar and Sushree Dibyadarshini will be must in the fantasy team if there is a chance of play on Friday. Tejal Hasabnis and TP Kanwar will be hoping to continue their good form. Nashra Sandhu’s experience will be key for the Pakistan team. The young leggie Syeda Aroob Shah could run through Indian line-up on a damp surface. Hafsa Khalid picked up 22 wickets from 27 one-day matches and also scored two fifties from 24 innings in this format.

Devika Vaidya could be handy as captain in case of the shortened game. 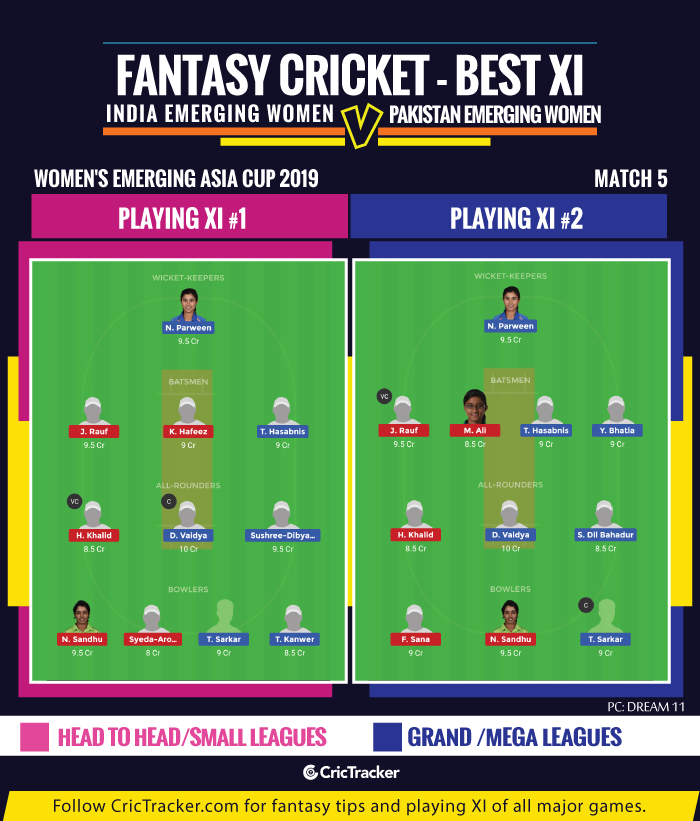 Pakistan is the only side that could come close in terms of quality in this tournament to the India Emerging Women. Hence, a balanced number of players can be picked from both the teams. Six players from India and five from Pakistan will be a perfect mixture.

India Emerging Women are expected to win the game if the rain allows some play.