Fahima Khatun will be perfect as a multiplier due to her all-round abilities.

The 6th game of the 2019 Women’s Emerging Asia Cup will be played between Sri Lanka Emerging Women and Bangladesh Emerging Women at the R Premadasa International Cricket Stadium in Colombo.

The 2019 Women’s Emerging Asia Cup has been affected by rain as none of the first two matches even had the possibility of the toss. The Sri Lanka Emerging Women and Bangladesh Emerging Women could consider themselves little lucky as they were supposed to be the weaker sides. None of the two were expected to be in the final but the rain has designed a different destiny. The two teams might lose this chance if the two matches on Friday also get washed out.

The good facilities at the venue might help in a shortened match. The chances of rain come down by afternoon and it will remain cloudy.

The weather is expected to play a major role in the pitch of R Premadasa Stadium. With the rains around, the track is expected to have a lot of swing and seam. The pitch is unlikely to get dried due to the cloudy weather.

The experience of Fahima Khatun, Harshitha Madavi and Hasini Perera is expected to play major role in this match. Kavisha Dilhari and Ritu Moni are expected to be differential picks from this game.

Fahima Khatun will be perfect as a multiplier due to her all-round abilities. 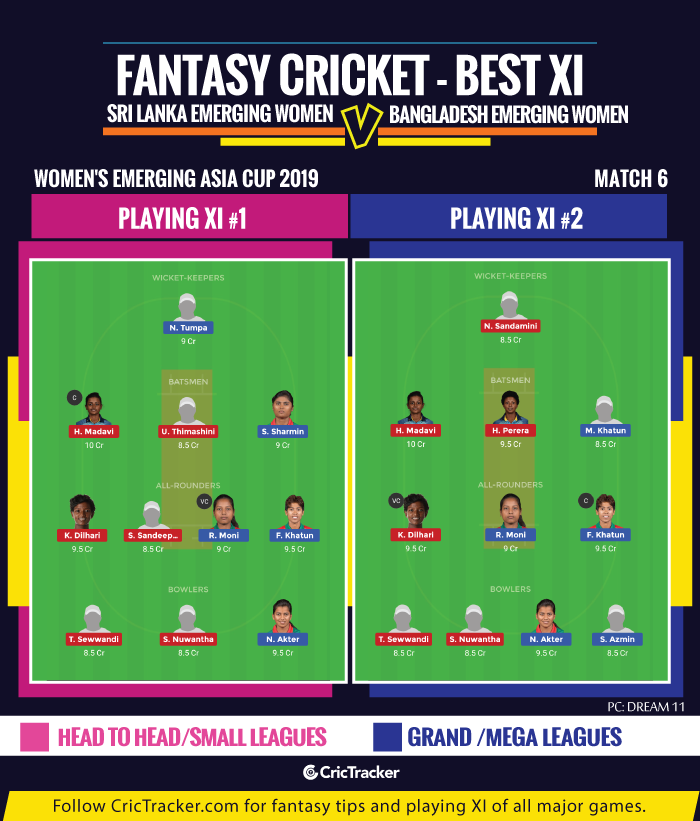 Bangladesh players are expected to come good against a relatively weaker team compared to India and Pakistan. The Bangladesh Emerging Women are good in the T20 format and those skills could be handy in case of a shortened match.