The 10th match of the Women’s Super Smash 2019-20 will be played between Canterbury Magicians and Wellington Blaze at the Hagley Oval in Christchurch.

This game can be viewed on Star Sports Select 1 in India. Live streaming available on Hotstar.

The Sunday’s afternoon match will be between the last year’s finalists, the Canterbury Magicians and Wellington Blaze at the Hagley Oval which will be telecasted. The runners-up, Magicians, had a tough to this edition losing both the match by a big margin. Their skipper Frankie Mackay had no support while batting in both matches where they were chasing big scores. The defending champions, Blaze, started the tournament with a huge 66-run win against the Otago Sparks. On Saturday, they clinched the match against Central Hinds by 10 wickets as they bundled out the Hinds to just 56.

Hagley Oval in Christchurch is likely to be under periodic clouds but no rain is forecasted for Sunday.

The Hagley Oval produced high-scoring matches during the last edition of the tournament. Both the matches recorded 160+ totals which include a comfortable successful 166-run chase. Over the last two days, we have witnessed 150+ totals quite often and hence we expect the same to continue here in Christchurch where boundaries are marginally shorter.

Frankie Mackay aggregated 367 runs at an average of 73.4 with help of three fifties and bagged nine during the last edition. She started with scores of 44 and 49 on the first day but went wicketless in both matches despite bowling full four overs. Jacinta Savage took four wickets across two matches including a 3-wicket haul on the first day. Jess Kerr claimed six wickets in nine matches during the last edition. She made a good start to the current tournament with five wickets already from only two matches. 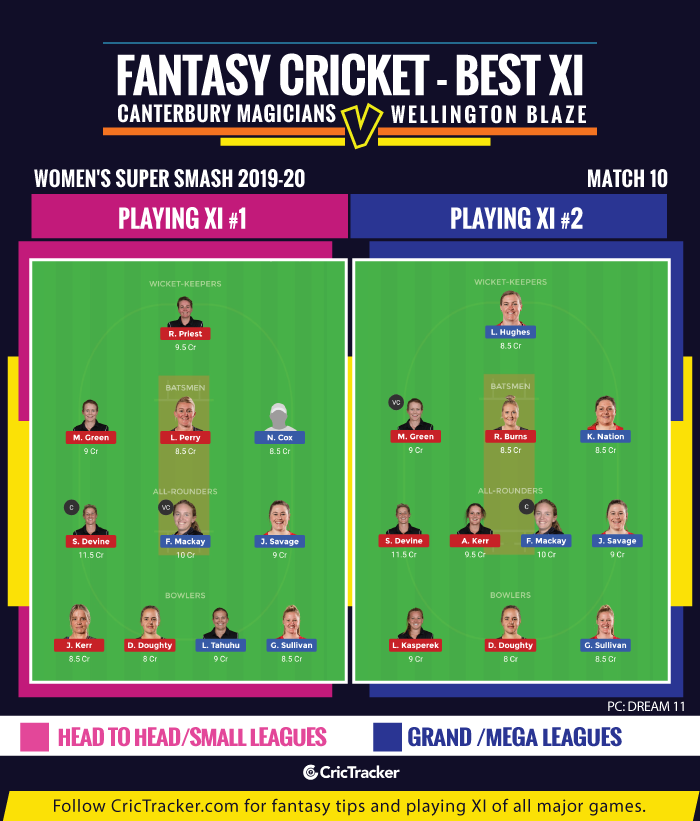 Lea Tahuhu didn’t play in the 2nd match of Magicians on Friday. It could be due to extra effort put on Friday morning where she performed with both bat and ball. We expect her to recover for the match on Sunday.

Wellington Blaze is expected to complete a hat-trick of wins.