The 21st match of the Women’s Super Smash 2019-20 will be played between Central Hinds and Otago Sparks at the McLean Park in Napier.

Central Hinds will host the Otago Sparks at the McLean Park on Thursday which will be the first game for both the teams in 2020. The two teams will be battling out for moving to No.3 in the points table as they won three of the seven matches. Both the teams finished 2019 with comfortable wins and will be looking to start the New Year on high. The Sparks clinched a 66-run win against the struggling Canterbury Magicians while the Hinds got better of the Auckland Hearts by 22 runs. It brought an end to Auckland’s 4-match winning streak from the beginning of the season.

Pleasant weather is forecasted for Thursday at the McLean Park in Napier and no threat from rain is expected.

McLean Park in Napier made its Women’s T20 debut when it hosted the game between Hinds and Magicians last week. The out of form Canterbury team posted only 115 batting first which was chased down comfortably by the Hinds. Usually, the McLean Park has been a high-scoring venue when it comes to Men’s Super Smash and same can be expected due to a flat track for the double-header.

Suzie Bates hasn’t bowled much in the tournament but is among the most valuable players due to her exploits with the bat. She scored an unbeaten 86 in the previous game against Canterbury which has taken her season tally to 399 runs. Bates scored those in only 7 innings at an average close to 80. Jess Watkin has been consistent of late as she scored 56 runs and took 2 wickets in the last match. It was her 2nd fifty in her previous four matches in which she also took four wickets. She found assistance from the pitch which helped her to be successful with the ball. Amanda Wellington scored 21 runs and picked up two wickets in her season’s first match. In the very next match, she picked up 3-wicket haul alongside scoring an unbeaten 42. 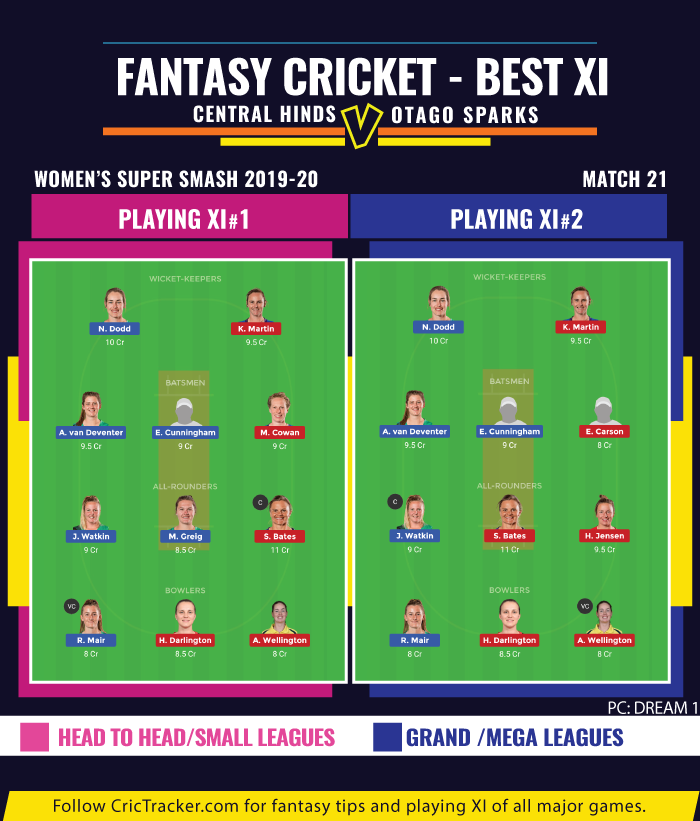 As many as nine players are common in our Suggested XIs which shows the impact they are expected to have in this match. It is quite unpredictable when it comes to batters’ category and hence we picked three experienced players to be on the safe side.

Otago Sparks is expected to win a thriller against the Central Hinds.