Sophie Devine will be missing this match due to WNCL commitments.

The 25th match of the Women’s Super Smash 2019-20 will be played between Wellington Blaze and Canterbury Magicians at the Basin Reserve in Wellington.

The Canterbury Magicians finally put an end to their losing streak in this competition as they defeated Northern Spirit by 4 wickets in the previous fixture. The last year runners-up, Magicians, lost each of their first six matches. They will now tour Wellington to face the defending champions, Wellington Blaze. In fact, the Blaze have won all the 8 matches they played so far. They will be looking to finish on the same spirit but will miss the services of their skipper Sophie Devine. The New Zealand all-rounder joined the Queensland team for the 2nd round of the WNCL earlier this week.

No threat from rain is expected during the match between Blaze and Magicians to be played on Thursday at the Basin Reserve.

The Basin Reserve recorded totals close to 150 during the two matches it hosted in the last season. In the first match of the current season, Otago made only 96 while Wellington posted a huge total of 183/4 in the 2nd game. We could witness a total of 270 runs at least in the match between Blaze and Magicians if a new track is used.

Sophie Devine has joined her WNCL team and will be missing this match.

Jacinta Savage and Gabby Sullivan are the leading wicket-takers for the Canterbury with 10 and 11 wickets respectively. Savage also aggregated 106 runs in 7 innings. Jess Kerr’s wickets tally in the tournament has raised to 18 from 8 matches and she is currently averaging 8.27. Amelia Kerr will be crucial in the absence of Sophie Devine as she will get to bat higher in the line-up. He took 12 wickets and scored 147 runs in the tournament thus far. 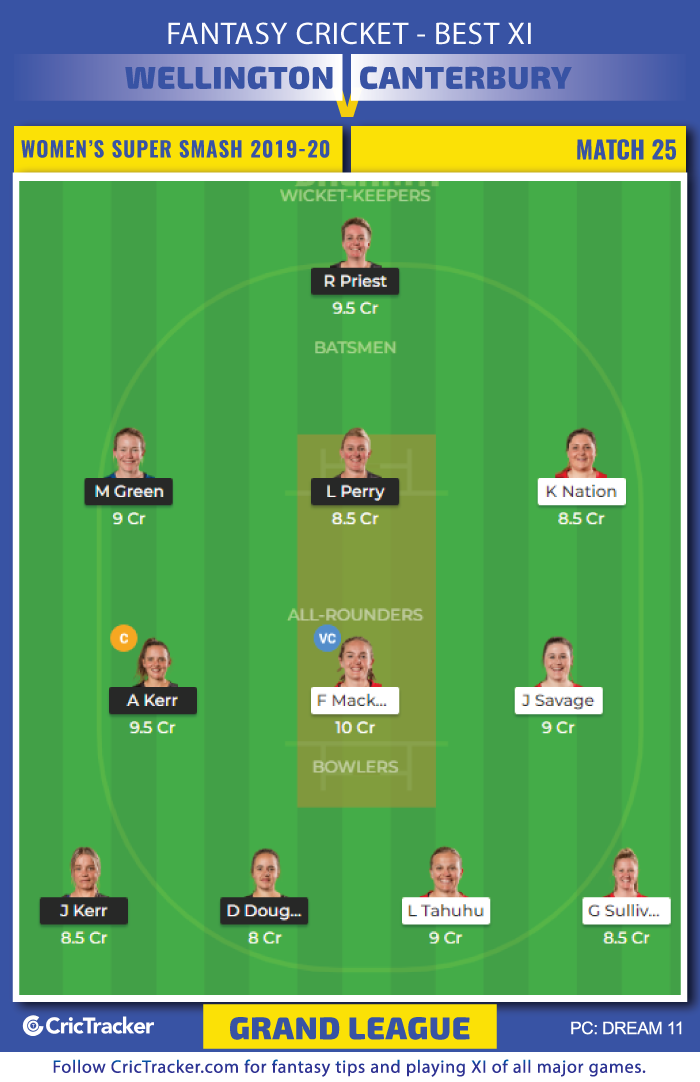 In the absence of Sophie Devine, the players picked across all-rounders and bowlers are almost similar in both of our suggested fantasy teams. The reason for it is the impactful players in those two categories. The only swap will be between the spinners Deanna Doughty and Leigh Kasperek in the Wellington team. Doughty has been consistent throughout the tournament picking 1-2 wickets almost every match. Kasperek has been quite rusty but can score few runs with the bat.

The Canterbury Magicians fancy their chances against Wellington Blaze in the absence of Sophie Devine.