Who would you go for as the captain- Mandhana, Matthews or Wyatt?

The Supernovas and Trailblazers faced off yesterday in the opening game of the Women’s T20 Challenge 2019. After 40 overs, it was the Smriti Mandhana-captained Trailblazers that came out trumps by two runs at the Sawai Mansingh Stadium in Jaipur. The Supernovas needed 19 runs off the last over with their skipper Harmanpreet Kaur in the middle. The veteran Jhulan Goswami had the leather in hand.

Kaur smacked four boundaries in the over, but couldn’t take her team over the line. Meanwhile, after this victory, the Trailblazers are all set to lock horns with Mithali Raj’s Velocity. It’s also a chance for Mandhana’s women to book themselves a berth in the final. However, Velocity won’t be easy to beat as they have the likes of Danielle Wyatt, Hayley Matthews and Amelia Kerr in their ranks.

The 2nd game of the Women’s T20 Challenge 2019 between Trailblazers and Velocity will be hosted by the Sawai Mansingh Stadium in Jaipur.

The atmosphere won’t be as pleasant for the players as the temperature will start around 42 degrees Celsius during match-time. It will only come down to 39 by the end of the game. The humidity will be on the lower side though and there is no possibility of rain.

The pitch in Jaipur turned out to be a sporting one. Even as the likes of Kaur and Mandhana showed that runs can be scored on the deck, the spinners also walked away with 10 out of the 11 wickets that fell yesterday. That was a competitive game and another match of high quality can be expected tomorrow in the Pink City. 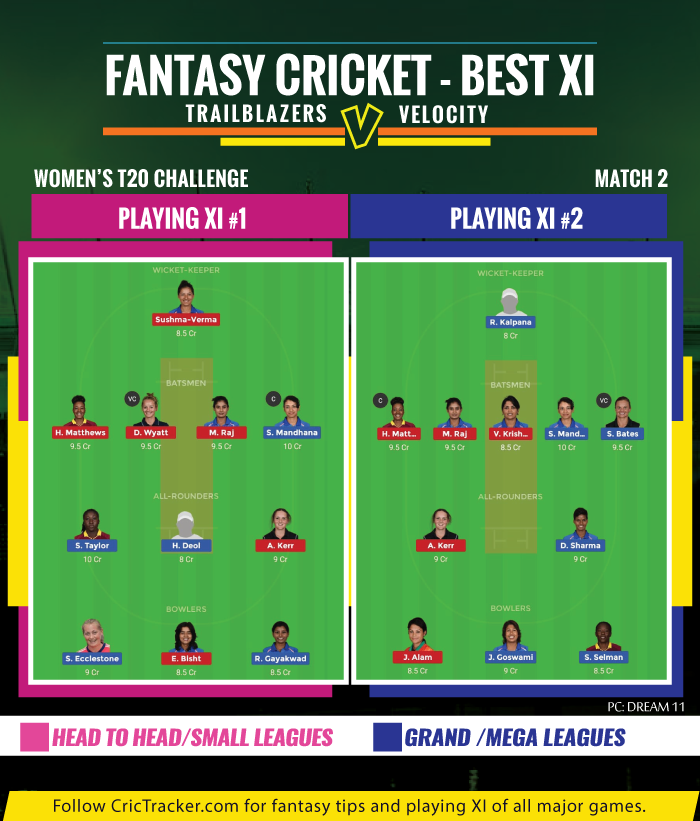 In the last game, out of the 11 wickets, one went to the pacers. Therefore, it is advisable to pick as many spinners in your team as you can.

The Supernovas are most likely to win the contest.