Mithali Raj-led Velocity will be in action for the first time as Trailblazers aim to seal their place in the final.

It was a perfect start to the Women’s T20 Challenge 2019. The action went right down to the last ball like last year and this time, Trailblazers prevailed in a nerve-wracking thriller. Smriti Mandhana played a brilliant knock of 90 runs opening the innings for her team and the onus will be on her once again to play through the innings. Mithali Raj will be leading Velocity which is the third team newly added this year.

Velocity team is making its debut this season and they will be keen to make an impact straight away. Mithali will have the likes of Danielle Wyatt, Hayley Matthews, Amelia Kerr and Jahanara Alam by her side. Veda Krishnamurthy is another experienced cricketer in their line-up and is expected to step up in the hour of need. For the Trailblazers though it will only be about going through the motions and repeating last night’s performance.

The Jaipur pitch was slow the other day and as the game progressed, the ball didn’t come on to the bat easily. Thus the batters who get set should look to play through the innings as Smriti Mandhana did in the first match. The score around 140-150 could be par if the same pitch is used for this encounter. With an afternoon start, the pitch will turn more as well. The team winning the toss is expected to bat first.

It will extremely hot around the start of the game. The temperature will hover in the 40s and it will be 42 degrees Celsius to start with and will only come down to 40 towards the end of the game. There is no rain in the forecast and there will be no dew in play either.

The Smriti Mandhana-led side is a bit overdependent on the skipper. But they have enough firepower with the ball to restrict the opposition to a lower total. Sophie Ecclestone bowled an exceptional 19th over on Monday to bring her team back in the game. Shakera Selman, Deepti Sharma and Jhulan Goswami are also extremely reliable with their variations. They are expected to go unchanged which means Jasia Akhtar and Bharati Fulmali will have to wait for their chances.

Danielle Wyatt and Matthews are to open the innings for Velocity while the skipper Mithali comes in next with the responsibility of playing the anchor. Veda and Devika Vaidya also have a key role in the middle-order and will have to push the run-rate up while Amelia Kerr is also a decent batter. Shikha Pandey leads their bowling attack with the veteran Ekta Bisht also present in their ranks. Sushree Pradhan and Shefali Verma are likely to be the two players to sit on the bench.

The experienced white-ferns player missed out in the opening match and she will be looking to make amends. She opened the innings with Mandhana and should’ve spent some time in the middle before going for her shots. Bates must have got hold of the conditions by now and is an extremely dangerous batter on her day. If she gets going along with Smriti, Velocity might have to chase the leather for most parts of the game.

Looking at all the three squads, Velocity looks a bit thin as a batting side. This is what makes Wyatt the real game-changer in this team. She has previously bossed the proceedings in India and has the ability to play through 20 overs. She can shift gears whenever needed and is a powerful hitter as well. A lot will depend on how the England international bats in this game.

The prediction is for the Trailblazers to seal their place in the final with yet another win. 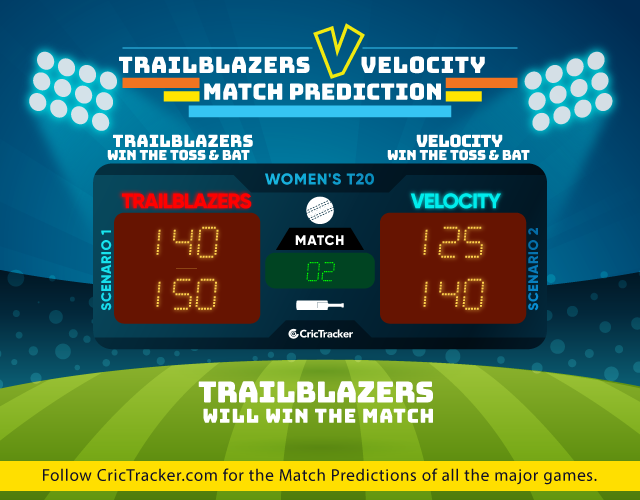