Pakistan last won a World Cup way back in 1992.

It has been 27 years now since Imran Khan and his boys lifted the Cricket World Cup for Pakistan. A lot has changed since then. The captain then is now the Prime Minister of the country. In the six World Cups since then, Pakistan’s best performance came in 1999 under the leadership of Wasim Akram where they finished the runners up.

The performance from ‘Men in Green’ was impressive in the last two editions of the tournament. However, they failed to go the distance. While they were the semi-finalists in 2011, Pakistan were knocked out in the Quarterfinals in 2015. Over the years, they have been one of the most unpredictable teams in the tournament. In 2017, they ended up surprising one and all to win the Champions Trophy.

The Unpredicted Team eyes the title

Pakistan has assembled a pretty strong squad for the tournament this time. They have got two of the best batsmen, Imam-ul-Haq and Fakhar Zaman, as their openers. The middle order boasts one of the best batsmen in the World – Babar Azam. He is usually very reliable and a lot of hopes rest on him in the tournament. There is a lot of experience as well in the ranks as Shoaib Malik and Mohammad Hafeez are the other two crucial members in the line-up.

Imad Wasim and Shadab Khan are the frontline spinners in the squad. Moreover, Pakistan has got one of the strongest pace attacks amongst all the ten teams in the tournament. Mohammad Amir, due to poor form, was omitted from the side. In his absence, Shaheen Shah Afridi will be the most important member. Hasan Ali, Junaid Khan and Faheem Ashraf are the other options available.

It will be quite a contest as Pakistan will be taking on Windies in their first encounter of the tournament. Another stern challenge awaits as England is next followed by Australia two games after that. The most-awaited duel, between Pakistan and India, will be played on June 16. The side will put an end to the league stage games after the battle against Afghanistan on June 29. 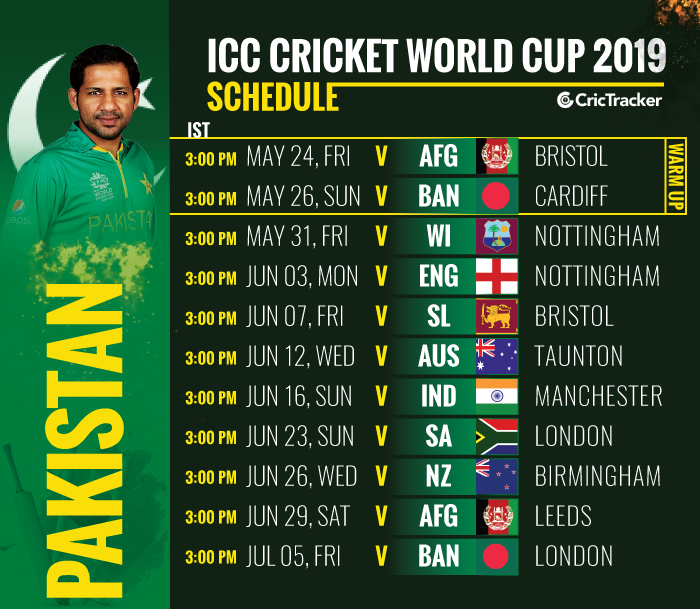