The fact that the Lankans have struggled to zero down on the skipper for the World Cup 2019 testifies how badly they are playing at the moment.

Sri Lanka Cricket is possibly in the middle of its worst phase ever in the history of the game. They have struggled to find their feet in white-ball cricket as well and the players have largely disappointed in the last one year. The fact that the Lankans have struggled to zero down on the skipper for the World Cup 2019 is a testament of how mismanaged things are at the moment.

Dimuth Karunaratne, who hasn’t played ODI cricket in the last four years, was named the captain of the side which shows how deep a trouble the team is in. Many of the players in the side have almost reached the twilight of their career and haven’t been anywhere close to their best. Meanwhile, the youngsters, are broadly inexperienced and have found it tough to match the expectations at the highest level.

It is quite tough to state the Lankans are even underdogs this time. The kind of cricket they’ve been playing has been hopeless. They need a miracle of sorts to turn things around. The team has gone back to their veteran cricketer, Angelo Mathews once again. The all-rounder hasn’t played any ODI cricket since the end of the Asia Cup last year.

Owing to his poor form, opener Upul Tharanga wasn’t picked in the side for the tournament. The Lankans have backed the rookie Avishka Fernando to do well in the tournament. A lot of their chances, however, will depend on Kusal Mendis and Kusal Perera who have usually been inconsistent. Similar has been the case with Thisara Perera who doesn’t seem to be at his best at the moment.

A lot of youth is present in the bowling department with the seasoned campaigner, Lasith Malinga, being the leader of the attack. Sri Lanka will start the tournament with the match against New Zealand. The Kiwis are one of the favourites to lift the title. A number of stern challenges lie ahead for them after this game as well. They need something special if they are to finish in the top four. 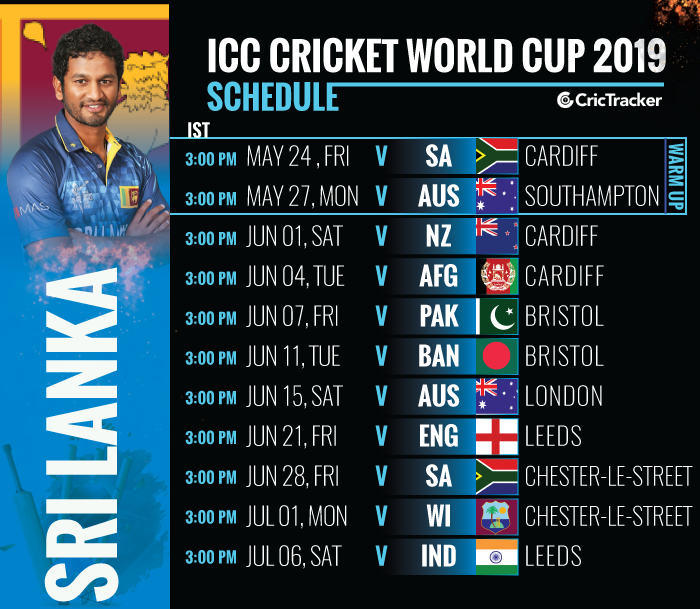