Windies kick off the tournament with the game against Pakistan on May 31.

The most dominant force in world cricket at one point in time, the Windies had to fight it hard to break into the World Cup 2019. The two-time champions (1975, 1979) had to play the qualifiers to get through to the final ten. After getting to the semifinals in 1996, the side has never managed to get past the quarterfinal stage thus far. They were knocked out in the quarters both in 2011 and 2015.

While they have struggled in the 50-over format, they have won the 20-over tournaments twice so far. The team has always fielded strong squads for the quadrennial event. However, the various issues between the cricket board and the players had a role to play in their downfall. Even this time, there are some big players ignored for the tournament. Yet, the squad looks quite strong for the upcoming tournament.

The Windies have brought in their Test skipper Jason Holder to lead the side in England. The team has played some really encouraging cricket in the recent times. The Universe Boss, Chris Gayle, who is set to retire from ODI cricket after the World Cup 2019, has been inducted into the squad. The left-hander has been in terrific form of late and will be the biggest strength for the team.

Also, a lot of hopes rest on Andre Russell. The all-rounder has lit up the IPL 2019 with his massive hitting and adventurous knocks. Even though he has played just one ODI since 2015, his current form persuaded the selectors to pick him. Shai Hope, who has been one of the most consistent performers for the team, will also be the key. As far as the batting is concerned, the side is packed with some massive hitters.

The bowling attack resonates what they usually field in the Test matches. The likes of Shannon Gabriel, Kemar Roach along with Oshane Thomas form the pace attack. The spin department seems to be the only potential weakness for this side. Windies kick off the tournament with the game against Pakistan on May 31. 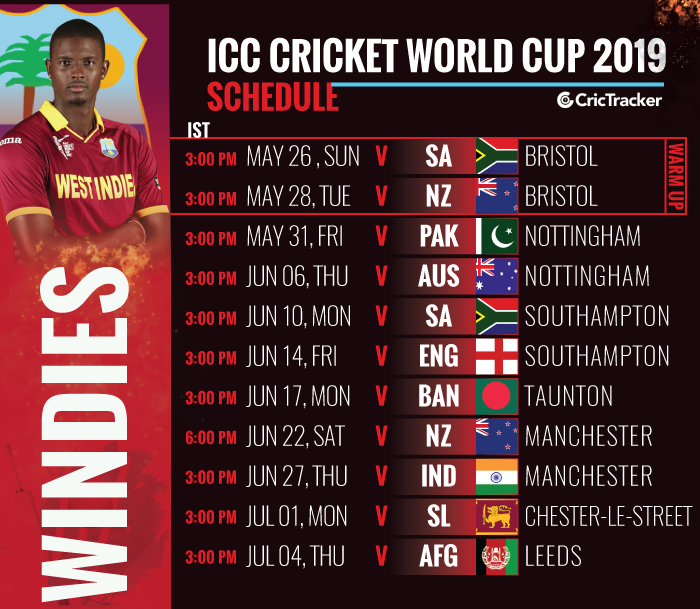