Australia are close to the table-toppers now in the points table.

The Indian cricket team registered a humble defeat against Australia by 66 runs in the first One Day International of the three-match series on November 27 at Sydney Cricket Ground. With this loss, India suffered a huge blow in the ICC Cricket World Cup Super League as they are now at last position. Australia, on the other hand, inched closer to the table-toppers England and are just win away from topping the table.

World Cup Super League is an initiative started by the International Cricket Council (ICC) earlier this year to promote bilateral 50-over games between cricketing nations. It is a two-year long competition that will help in deciding the nations that will take part in the World Cup 2023. India, who are the hosts in 2023, and the other top seven teams will qualify automatically for the World Cup.

This was India’s first game in Super League and they failed to open their account on the points table. While Australia played their fourth game and after registering their third win, have 30 points under their belt. England also has 30 points but is situated at top of the table due to a better run rate.

Coming back to the game, after winning the toss, the Men in Yellow racked up a humongous total of 374 on the board at the loss of 6 wickets. The Australian batters launched an assault on the Indian bowling line-up as the opening duo of Warner and Aaron Finch stitched a 156-run stand within 28 overs. Warner smashed 69 runs while Finch scored his 17th ODI ton.

Steve Smith smashed another ODI hundred as he scored 105 runs off just 66 deliveries while all-rounder Glenn Maxwell added 45 runs to the scoreboard in 19 balls.

In reply, India could score only 308 runs as no batsman other than Shikhar Dhawan and Hardik Pandya took the responsibility. Hardik emerged as the highest run-getter for the team with 90 runs off 76 deliveries while Dhawan also scored 74 runs. Adam Zampa and Josh Hazlewood took four and three wickets respectively to ensure that their team won the game by 66 runs. 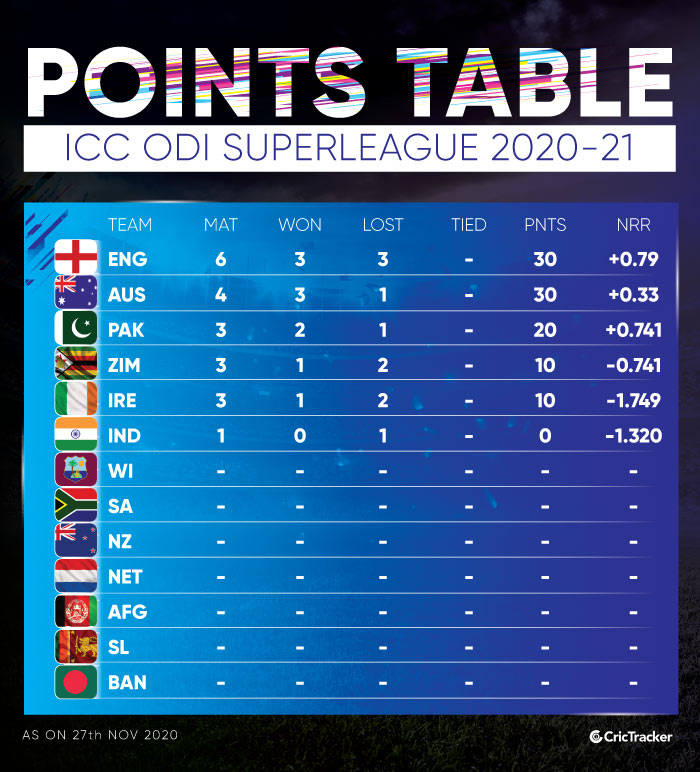