India, Australia or England can qualify for the WTC final if they get certain score lines in their favor.

The World Test Championship (WTC) is nearing its climax, and in the month of June, the final will be played at the Lord’s Cricket Ground. Now, New Zealand have already qualified for the summit clash. The Kane Williamson-led side experienced a fairytale home season and walloped both West Indies and Pakistan, winning all the four-Test matches that they played this summer.

Now the question is, can India qualify for the WTC final and face the kiwis at Lord’s? Well, the possibilities are high for this to happen.

And, that is where the series between India and England on Indian soil assumes paramount importance. The two sides will square off in a four match Test series, with the first Test starting in Chennai on February 5th, 2021. Now, India or England can qualify for the final if they get certain score lines in their favor.

For the Indian side, they should win the series by a margin of at least 2-1 or 2-0. This will ensure that the Virat Kohli-led side will travel to Lord’s to face Kane Williamson and his men.

Australia can still qualify for the World Test Championship final

Now, let us throw in another statistic to spice things up a little bit. Since 2013, India has played 34 Test matches on home soil and, they have lost just a single Test. They have won their last 4 Test matches at home by an innings, and have proven to be near-invincible on home soil.

Also, the last time India lost a Test series at home was in the year 2012. And guess what, it was England who defeated them. Now, with all this brought into the equation, the series between India and England assumes gargantuan proportions.

New Zealand have booked their ticket to Lord’s. It remains to be seen which team will face them. And, with India having such a formidable record at home, the chances of Kohli and his men travelling to Lord’s to take on the Black Caps is pretty high. 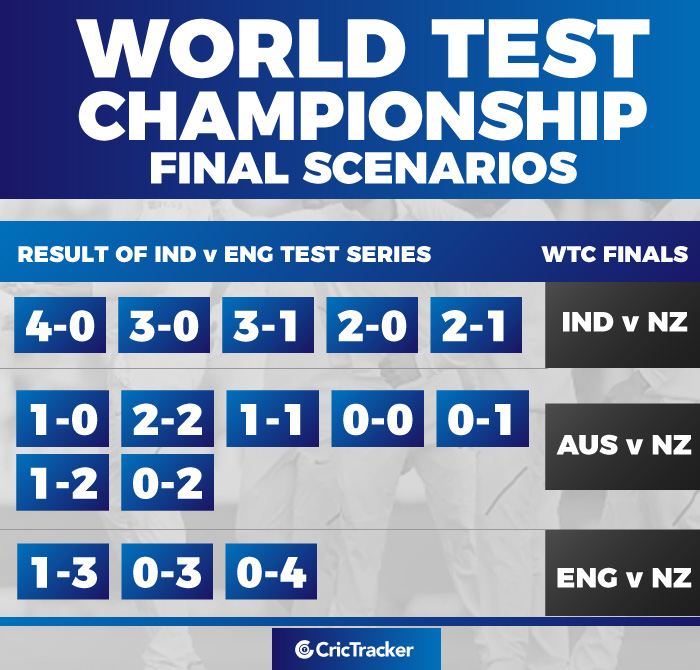