Watch Aus vs Pak T20 live on YuppTV and never miss an update. 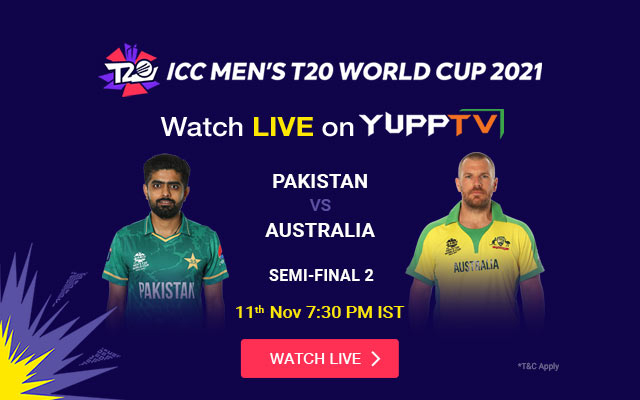 The second semifinals of ICC Men’s T20 World Cup 2021 will witness an intense battle between Pakistan and Australia in Dubai. Watch T20 World Cup live on YuppTV and enjoy all the high-voltage action.

Pakistan has won all five games and remains the only team unbeaten in the tournament. Meanwhile, the Australians have only lost one match so far. A better net run rate over South Africa guided Aussies to the semifinals. The Men in Green had a dream start to the tournament with a historic win over archrival India and continued the momentum in all other games.

While Babar Azam is leading from the front, Mohammad Rizwan, Fakhar Zaman, and Shoaib Malik are chipping in whenever needed. Shaheen Afridi, Hasan Ali and Rauf have been brilliant with the ball. Pakistan has won the T20 world cup in 2009 and will eye on their second trophy.

Aaron Finch led-Australia is yet to get their hands on the T20 world cup. Having won the ODI world cup for a record five times, the T20 trophy has been luring the Aussies big time. They managed to reach the 2010 final but lost to England by 7 wickets.

While David Warner is back to his destructive form, Mitchell Marsh, Steven Smith, and Marcus Stoinis will have a significant role in this match. Mitchell Starc, Josh Hazelwood and Pat Cummins are the key bowlers. Glenn Maxwell is handy with bat and ball. Pakistan and Australia have a similar record in the T20 world cup games.

Both the teams have won three each in their six encounters. The last time when they faced each other in 2016, Australia won by 21 runs. Will Australia end Pakistan’s undefeated streak, or Pakistan grab their second trophy?

Watch Aus vs Pak T20 live on YuppTV and never miss an update.