All the matches can be watched on YuppTV from Continental Europe and the Middle East (excluding UAE). 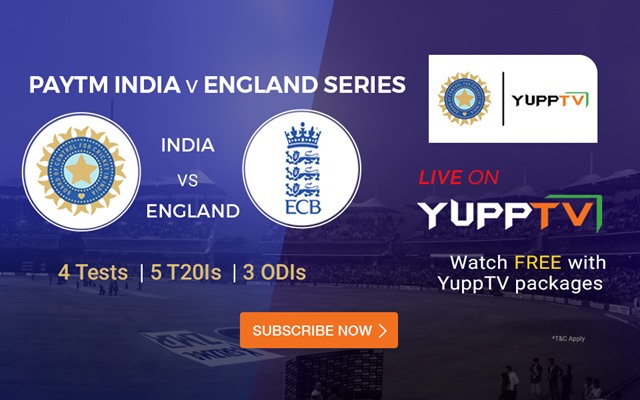 Paytm India vs England series 2021 comprising 4 Tests, 5 T20Is, and 3 ODIs has commenced on the 5th of February in Chennai. The series is scheduled from 5th February to 28th March in three venues namely, MA Chidambaram Stadium, Chennai, Sardar Patel Stadium, Ahmedabad, and Maharashtra Cricket Association Stadium, Pune. India will be playing against England in 1 Pink ball Test and 3 regular Test matches in all these.

The Indian team has entered the series on a high note with its historic triumph against Australia in the Gabba. Indian team included players Virat Kohli, R Ashwin, J Bumrah, and Hardik Pandya that missed/ were not a part of the Test matches in Australia. The team also included Ajinkya Rahane, Rishabh Pant, Pujara, Shubhman Gill, Mohammad Siraj, and Washington Sundar that have emerged as the heroes in the Australia Tests.

England too have entered the series after a grand display of their prowess against the Sri Lankan team in the 2-Test series. England Team decided to bring in Jofra Archer and Ben Stokes into the team while resting Jonny Bairstow, Mark Wood, and Sam Curran. The series began amidst high expectations on both teams.

The first Test that began on 5th February ended with England securing a massive victory by 227 runs in which Joe Root, the English Captain who was on a roll in Sri Lanka scored a double century again. India struck back in the second Test and emerged victorious by a difference of 317 runs with the help of Rohit Sharma’s 161 in the first innings and R Ashwin’s 5 wickets in the first innings and century in the second. The competition is fierce, and both teams are determined to conquer each other on the field to secure a victory.

All the matches can be watched on YuppTV from Continental Europe and the Middle East (excluding UAE). You can download the YuppTV App on Smart Televisions/ Smartphone to watch the entire Paytm India vs England Series 2021 Live Streaming from the above-mentioned regions.