Thee Kolkata Knight Riders all rounder Yusuf Pathan has a reason to be overjoyed. Yes, it is indeed very great news for the entire Pathan family. The King of Big shots has flown back to India from UAE to spend some time with his new born prince at his home. He flew back to India to be by his wife’s side immediately after his team’s 41 runs victory over Mumbi Indians on Wednesday.

Yusuf’s wife Afreen, a Mumbai based physiotherapist gave birth to a baby boy in Baroda yesterday. Yusuf has been extremely overwhelmed by this and he has decided to be with his son and spend as much time as he can. Yusuf Pathan told the media members that He will surely dedicate an innings to his new born son. 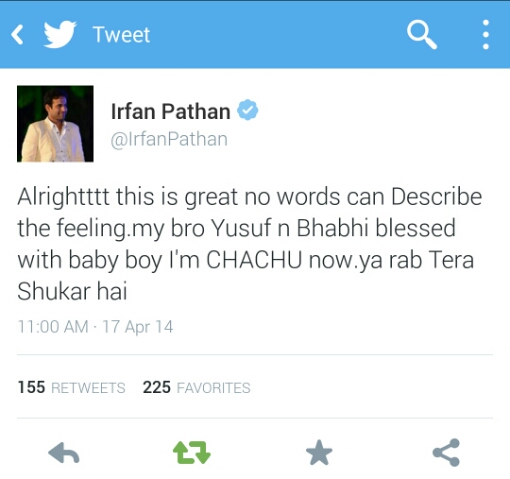 Yusuf’s younger brother and Indin all rounder Irfan Pathan who is with Sunrisers Hyderabad currently also broke the news yesterday and couldn’t hold his excitement. “Alrightttt this is great no words can describe the feeling. My bro Yusuf n bhabhi blessed with baby boy I’m chachu now. ya rab tera shukar hai” he tweeted.

Yusuf is most likely to miss KKR’s seond match against Delhi Daredevils on April 19 but he will surely play his team’s third match against the mighty Royal Challengers Bangalore in Sharjah.

CricTracker also wishes Yusuf Pathan and his entire family hearty congratulations and we all are very happy for the birth of his son.