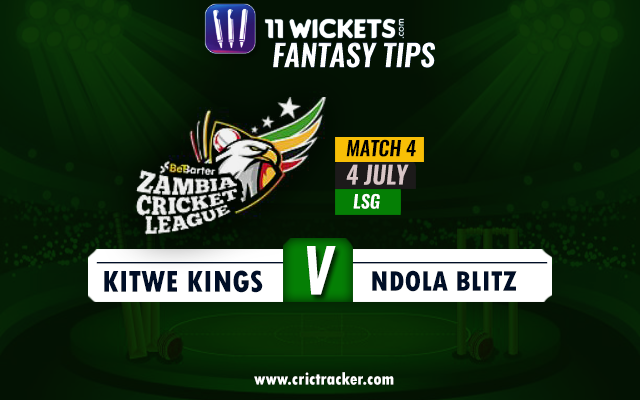 The 4th match of the Zambia Cricket League between Kitwe Kings and Ndola Blitz will be played at the Lotus Sports Club Ground in Kamwala.

This match starts at 2:30 PM local time (6 PM IST) (12:30 PM GMT). Live streaming will be available on the Youtube channel of BetBarter.

Match 4 of the ongoing Zambia Cricket League will see the Kitwe Kings lock horns against the Ndola Blitz. Both the sides will be playing their second game of the day. The Kings defended 99 in the opening game of the day. They won a thrilling encounter against the Lusaka Heats by six runs. Ndola Blitz, on the other hand, defeated the Kabwe Stars in their first game thanks to an exceptional performance from their bowlers.

The sun will be out in the afternoon and the players are likely to feel the heat. The temperature will hover around the mid to late 20s with no chance of rain at all.

The surface has turned out to be decent to bat on. Kitwe Kings scored 99 runs in the first match of the tournament and the score was almost chased down as well. However, the second match turned out to be a low-scoring affair with the side batting first scoring only 64 runs.

Himal Patel batted at three and scored 21 runs off 14 deliveries. He also bowled his quota of two overs but went wicketless. Zoyeb Chand won the Man of the Match award in the first game for his all-round contribution. He scored 35* off 18 balls and then picked up a wicket in the only over he bowled. Azhar Haveliwala shone with the ball as well returning with the figures of 2/16.

For the Ndola Blitz, Richard Parker and Aidan Hawkesworth bowled well picking two wickets each and were also economical. James Green also bowled decently conceding only 8 runs in his two-over spell. Connor opened the batting for them scoring a quick-fire 24 off just 11 balls. Callon Harris was slow in run-scoring but anchored the innings well too.

The likes of Haveliwala and Dadabhai are very good bowlers and do not go by performance in the previous games. Expect them to perform soon.

Ndola Blitz are expected to win this match.