Shakib Al Hasan had a quiet ODI series against Sri Lanka, but you can still back him to do well in this series. 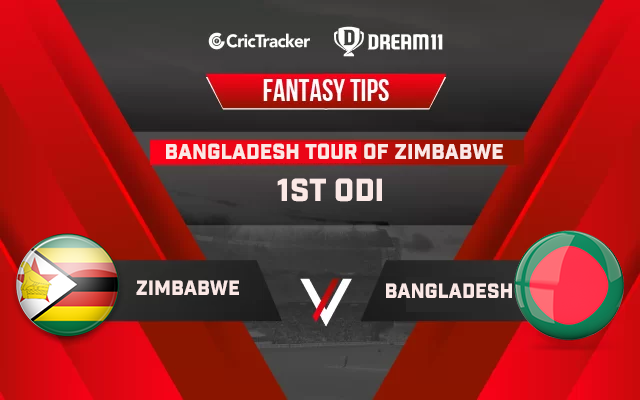 Zimbabwe will take on Bangladesh in the 1st of the 3-match ODI series on Friday. Since this ODI series is part of the ICC Super League, it will be of utmost importance for both sides, from the 2023 World Cup qualification point of view. Zimbabwe had last played on ODI way back in November last year when they traveled to Pakistan and lost the series by 2-1. Brendan Taylor will be leading Zimbabwe in this series.

Meanwhile, Bangladesh had a good start to the tour with a convincing win in the only Test match. They are currently ranked 2nd in the ICC Super League table with 50 points and a net run-rate of 0.013. Musfiqur Rahim will miss this series due to personal issues. They have some injury concerns, with Tamim Iqbal and Mustafizur Rahman both nursing injuries.

The pitch appears to be a batting-friendly one. However, quick bowlers do get lot of movement from the surface in the initial overs. Anything over 270 provides the team batting first more chances of winning this match.

Tamim Iqbal has injury concerns, but in case he plays, he will be a must pick. He had a decent series with the bat against Sri Lanka, where he ended up scoring 82 runs in 3 matches at an average of 27.33.

Mahmudullah has announced his shock retirement from Test cricket after playing brilliantly in the only Test. He had a good ODI series against Sri Lanka a couple of months back, where he scored 148 runs in 3 matches at an average of 49.33.

Sikandar Raza is back in the Zimbabwean squad. He didn’t feature in the home series against Pakistan. The 35-year-old Pakistan-born all-rounder has 2856 runs and 61 wickets to his name in the ODIs.

Blessing Muzarabani got a brilliant start to his career in all 3 formats of the game. He has played 21 ODI matches and has picked up 25 wickets, with the best figures of 5 for 49.

Taskin Ahmed was in the news for an on-field controversy in the Test match. He has been in and out of the Bangladesh ODI squad since he made his debut in 2014. However, the gun pacer has scalped 52 wickets in his 39 ODIs, with the best figures of 5 for 28.

Zimbabwe’s stand-in skipper for this series, Brendan Taylor will be playing his 200th ODI on Friday. He has mustered 6530 runs in 198 innings at an average of 35.68 in this format, which includes 11 centuries and 39 half-centuries.

Ryan Burl is in the early stages of his career, but has already made a good impression with his all-round skills. You can take a risk and pick him as your fantasy team skipper.

Donald Tiripano is a capable player, but since plenty of options are available in the all-rounders’ category it’s quite difficult to pick him in the final eleven.