It is advisable to pick 4 bowlers in one of your Dream11 fantasy teams. 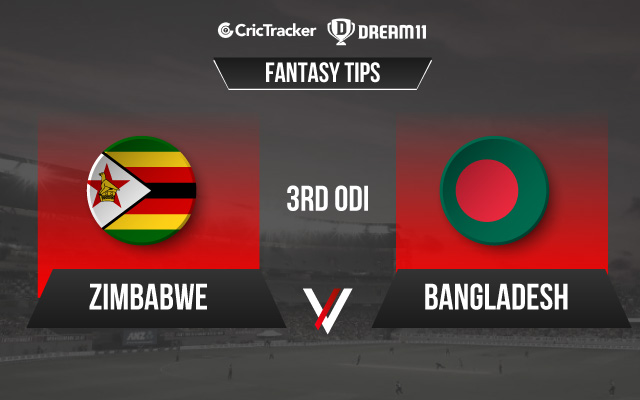 Zimbabwe will square off against Bangladesh in the 3rd and final ODI of the series. With the series already secured by Bangladesh, Zimbabwe will now look to win at least the last match of the series to avoid a whitewash. They had their chances in the 2nd ODI and have only themselves to blame for allowing Bangladesh to win the match.

Meanwhile, a crucial partnership between Shakib Al Hasan and Mohammad Saifuddin in the 2nd ODI steered Bangladesh to the series win with one match yet to be played. Shakib Al Hasan proved why he still is one of the best all-rounders in the world. He is a prime contender for the player of the series award.

The batters can trust the bounce and play the shots accordingly. The surface doesn’t change much here. The bowlers can extract plenty of pace and bounce from the surface. Anything between 270-280 is a good score on this wicket.

Brendan Taylor was going smoothly and hitting the ball really well in the 2nd ODI, until he was dismissed bizarrely for 46 runs. In 2 matches in this series, he has scored 70 runs.

After getting out cheaply in the 1st ODI, Tamim Iqbal looked in fine touch and played some fabulous shots before getting dismissed for 20 runs. He can be backed to do well in the final ODI.

Shakib Al Hasan did the damage with the ball first up in the 2nd ODI by picking up 2 crucial wickets, and later on, he played a match-winning knock of 96* to help his side win the series.

Sikandar Raza gave his all in the 2nd ODI. He scored valuable runs, picked a wicket, and took a stunning catch to dismiss Tamim Iqbal. He is a must-pick for your fantasy teams.

Blessing Muzarabani has the knack of picking up wickets when it is needed the most by the side. He gave Zimbabwe hope in the 2nd ODI by dismissing Mahmudullah for 26 runs. Muazarabani has scalped 3 wickets in this series at an economy of 4.06.

Shoriful Islam rattled the Zimbabwe batters in the 2nd ODI. He picked up 4 wickets at an economy of 4.59.

Liton Das is the leading run-scorer in this series. He has scored 123 runs in 2 matches at an average of 61.5 which includes a sensational century in the 1st ODI.

Dion Myers made a positive start in the 2nd ODI, but a rash shot ended his innings when he was batting on 34. He is a risky captaincy pick for your fantasy teams.

Mehidy Hasan Miraz has picked up one wicket in 2 matches so far in this series, and has also scored 32 runs with the bat. It’s a risky choice to pick him as your fantasy team skipper.

With a lot of competition among the bowlers, it’s hard to pick Tendai Chatara in the final eleven.