ZIM vs BAN Match Prediction, 1st ODI – Who will win today’s match between Zimbabwe vs Bangladesh?

ZIM vs BAN Match Prediction, 1st ODI – Who will win today’s match between Zimbabwe vs Bangladesh?

Bangladesh will be out for revenge in the ODI series against Zimbabwe after their embarrassing T20I series defeat.

Bangladesh’s woeful run in T20Is has further compounded after hosts Zimbabwe subjected them to a humiliating series defeat, their second successive series defeat in T20Is after their hammering in the Caribbean last month.

But the hosts will have to be wary of the Men in Green as they are a completely different outfit in the 50-over format under Tamim Iqbal and will be out for revenge in the three-match ODI series. Bangladesh have won their previous two ODI series against stronger teams, South Africa and West Indies.

Meanwhile, Zimbabwe will be on cloud nine following their historic triumph against the visitors in the T20I series and will look to carry the same momentum in the ODI series commencing on the 5th of August, Friday, at the Harare Sports Club.

The surface at Harare has been a low-scoring one as the two T20Is following the opening match were more conducive for the bowlers and the teams struggled to up the ante in the middle overs. The team winning the toss will likely opt to bat first.

Bangladeshi ODI skipper Tamim Iqbal has been one of the most consistent performers for Bangladesh throughout his career and arguably their best batter in the side. He was pivotal in the team’s victory in the Caribbean, giving decent starts in all three ODIs, registering an unbeaten half-century in the second ODI.

Mustafizur Rahman conceded 50 runs in the first T20I against the hosts but came back strongly in the following two matches and has looked at his best. The left-arm pacer’s contribution to the team will be crucial for their chances in the ODI series, along with their potent spinners. 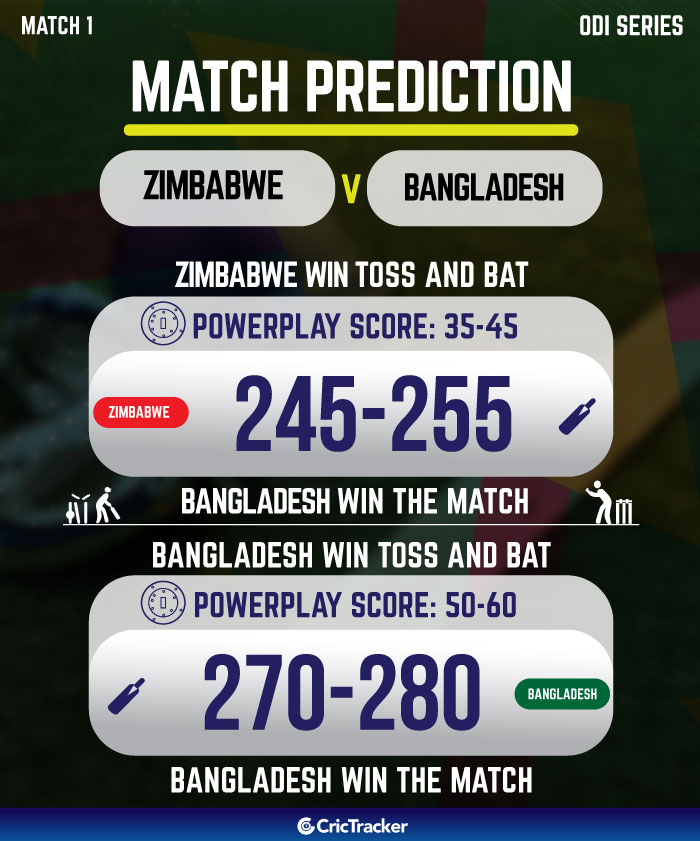