Zimbabwe vs Bangladesh, 2021 Match Prediction – Who will win today’s 1st T20I match between ZIM vs BAN?

Tamim Iqbal won't be a part of the series due to a knee injury.

Zimbabwe and Bangladesh are set to lock horns in a three-match T20I series, starting Thursday, July 22 at the Harare Sports Club. The Tigers whitewashed the ODI series 3-0, but the fact that the hosts gave them a run for their money can’t be denied. The T20I games are expected to be exciting as well.

Prior to the series, the visitors have been dealt with a blow after Tamim Iqbal was ruled out due to a nagging knee injury. Mahmudullah is set to lead the team in his absence. As far as Zimbabwe are concerned, they will want to make amends after letting Bangladesh off the hook in all the three ODIs.

The pitch in Harare has been a sporting one over the years with the average score in excess of 150. However, the track seems to get difficult to bat on as matches progress. Going by the records, batting first should be the way forward. The playing conditions will be sunny with the temperature around 22 degrees Celsius. The humidity will be in the 20s.

Liton Das was Bangladesh’s leading run-scorer in the ODI series, having notched 155 runs at an average of 51.66. He also notched a century in the opening game of the series. In T20Is, the Dinajpur-born has impressive numbers against Zimbabwe. In five games, the right-hander has scored 193 runs at an average of 48.25 with a top score of an unbeaten 60.

Mustafizur Rahman didn’t play the first two ODIs but made an impact right away in the third game of the series. The left-arm speedster picked up three crucial wickets and put the brakes on the opposition’s scoring. He has decent numbers against Zimbabwe in T20Is as well. In eight T20Is, the southpaw has taken 15 wickets at an impressive average of 12.73. 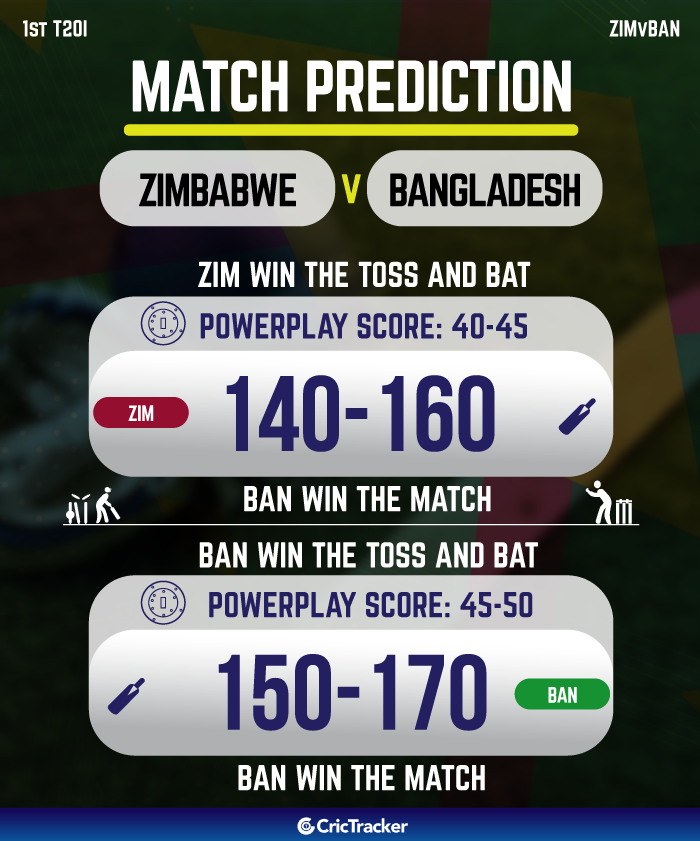