Zimbabwe vs Bangladesh, 2021 Match Prediction – Who will win today’s 3rd ODI match between ZIM vs BAN?

Liton Das is currently the leading run-scorer of the series.

Bangladesh have already sealed the fate of their three-match ODI series against Zimbabwe at the Harare Sports Club. After winning the opening game in a pretty comprehensive manner, Tamim Iqbal and Co had to work hard in Sunday’s game, but they won by seven wickets to take a 2-0 lead in the series.

Shakib Al Hasan returned to form with the bat in hand notched an unbeaten 96 in the Tigers’ run-chase. In the meantime, for Zimbabwe, the series might have gone, but they have ODI Super League points to play for. The hosts will be looking to evade a series defeat and garner a win in the final ODI.

The pitch in Harare has been fairly good for batting. Run-making hasn’t been all that tough as shown by Shakib and Liton Das. The spinners are again expected to come into the picture. Keeping in mind the result of the previous two games, batting first should be the way forward for both the teams.

Liton Das played a stupendous knock in the first ODI and helped his team to victory. He scored 102 and showed his class and calibre. In the second match of the series, he had his travails. He scored 21 runs before getting out against the run of play. However, despite failing last time, he remains the leading run-scorer of the series, having notched 123 runs at an incredible average of 61.50.

Shakib Al Hasan hasn’t only done well with the bat, but with the ball as well. In the first ODI, the Magura-born picked up a five-wicket haul and broke the backbone of the Zimbabwean batting lineup. In the second match, he picked up a couple of scalps as well. He is currently the leading wicket-taker for the Tigers in the series and is expected to add to his tally. 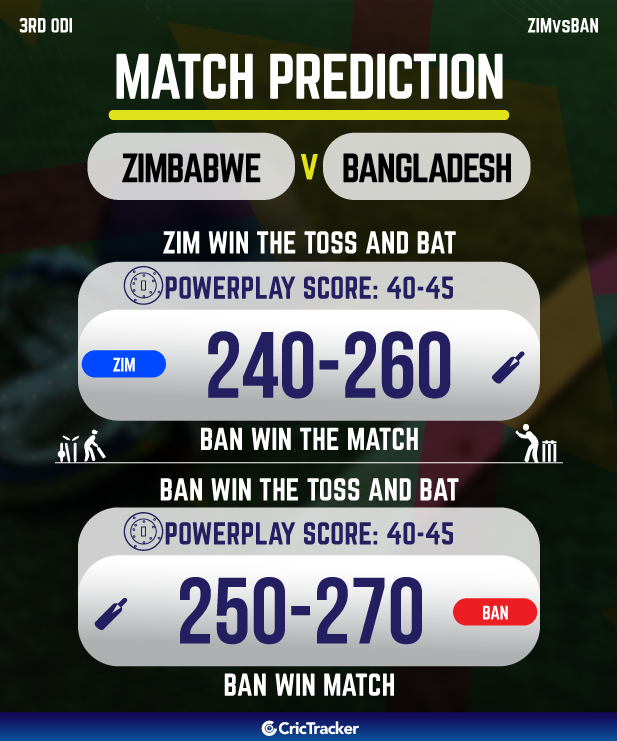