Afghanistan vs Netherlands, 2nd ODI Match Prediction – Who will win the match?

Afghanistan vs Netherlands, 2nd ODI Match Prediction – Who will win the match?

Afghanistan and Netherlands will play the second ODI of the ongoing series on January 23 at the West End Park International Cricket Stadium in Doha. Afghanistan won the first match by 36 runs.

The Netherlands won the toss and elected to bowl. Afghanistan made 222 runs for the loss of eight wickets in 50 overs. Rahmat Shah made 70 runs off 102 balls and Hashmatullah Shahidi made 73 runs off 94 balls. They were the only players who scored over 30 runs for the team. Brandon Glover picked three wickets for the Netherlands.

In reply, the Netherlands could make only 186 runs in 48 overs and lost the match. Scott Edwards made 68 runs off 82 balls and was the highest scorer for the Netherlands. None of the other batters could do much for the team. Captain Pieter Seelar did make 32 runs off 69 deliveries but his innings didn’t help the team.

The previous match was the first international game at this venue. The pitch is expected to support spinners which showed in the first match. The team winning the toss should look to bowl.

Rashid Khan picked three wickets in nine overs while giving away just 31 runs in the last match. His spell helped Afghanistan bundle up the Netherlands for just 186 runs. Rashid has taken 143 wickets in 75 ODIs at an average of 18.40, an economy of 4.17, and a strike rate of 26.4.

Scott Edwards was the highest scorer for the Netherlands in the previous match. He made 68 runs off 82 balls while opening the innings. He made his ODI debut in August 2018 and has made 223 runs in 11 matches at an average of 27.87 and a strike rate of 78.79. 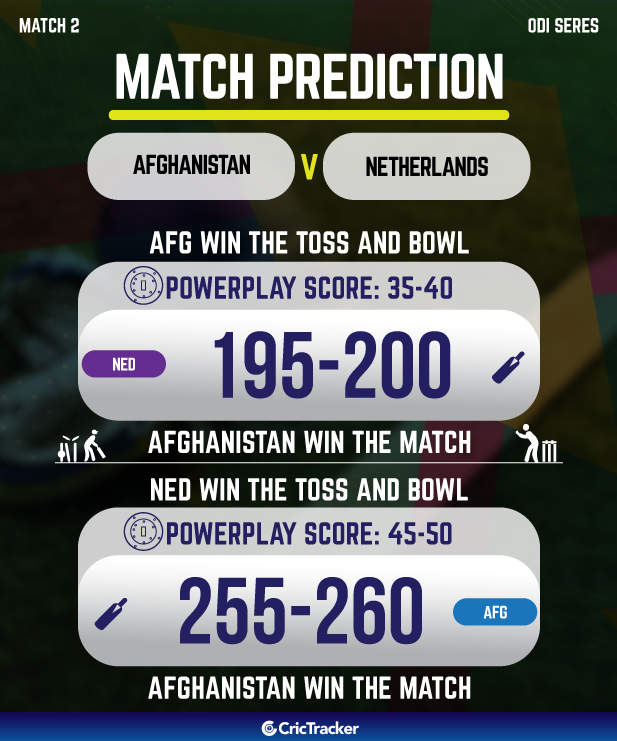