Afghanistan won the practice game by six wickets, bowling the opposition out for 156. Rashid Khan and Mujeeb Ur Rahman didn't bowl in that game.

After a forgettable World Cup campaign, the West Indies also lost the ODI series against India at home. The poor shows prompted a lot of changes, one of them was appointing Kieron Pollard as the ODI skipper, replacing Jason Holder. A number of players, who did well in the 2019 Caribbean Premier League (CPL) were also rewarded. Their next assignment is versus Afghanistan in India.

The visitors will play a three-match ODI series at the Bharat Ratna Shri Atal Bihari Vajpayee International Cricket Stadium in Lucknow to start their campaign. Like the West Indies, even the Afghans had a horrid World Cup after which Rashid Khan was given the captaincy mantle. Rashid has tasted immediate success in Tests and T20Is and it’s time for him to replicate the same in ODIs.

The venue has only hosted a solitary T20I last year with India scoring 195 and the West Indies getting only 124. The practice match of the upcoming series was played here and batting turned out to be difficult. The fast bowlers troubled the batters to a large extent. A high-scoring affair doesn’t seem to be in store. There are no chances of rain with the temperature around 28 degrees Celsius.

Rashid Khan and Mujeeb Ur Rahman didn’t bowl in the practice match, but are likely to be back for the ODIs, making the Afghan bowling a tougher prospect. Sharafuddin Ashraf picked up three wickets in the warm-up game and it won’t be easy to leave him out. In that case, Gulbadin Naib may be excluded. Ikram Ali Khil may make way for Afsar Zazai, who has looked in ominous touch of late.

Zazai did well in the 2019 Shpageeza League and was also impressive in the Bangladesh Test in September. Shah, Najibullah Zadran and Asghar Afghan scored in the 30s and 40s in the practice game and need to keep going. Hazratullah Zazai and Javed Ahmadi form an explosive opening duo and the Afghans will look for a steady start from them. Mohammad Nabi has to bring forth all his experience.

The West Indies don’t have the services of Chris Gayle. But Shai Hope has returned after the hand injury that he sustained in the opening Test versus India. He has the ability to hold one end up even as his opening partner Evin Lewis likes to take bowling attacks to the cleaners. Shimron Hetmyer has blown hot and cold this year, but he knows the Indian conditions well, having played last year.

It’s expected to be a challenge for Kieron Pollard- the captain. Roston Chase is a key player in their setup as he can not only get some useful runs in the middle, but also chip in with some useful overs. Romario Shepherd picked up three wickets in the practice game and he’ll look for a similar show to start with. Hayden Walsh Jr was a tad expensive, but it’s unlikely for him to get sidelined from the lineup. 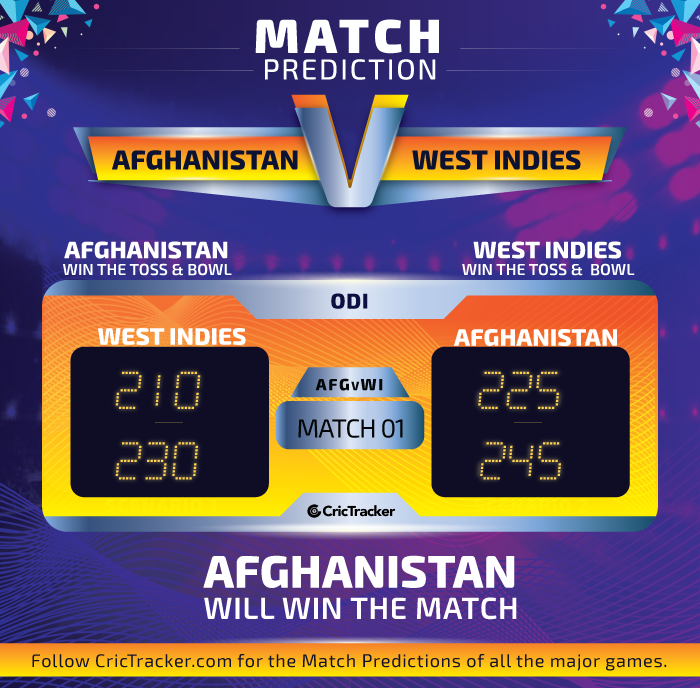