Analysis: Expected performance, runs and century prediction for Virat Kohli on the tour of Australia

Analysis: Expected performance, runs and century prediction for Virat Kohli on the tour of Australia

India will be playing three T20Is, four Tests and three ODI matches on this Australian tour and all eyes will be on King Kohli.

Virat Kohli-led India will kick-start their tour of Australia with the three-match T20I series starting 21st November in Brisbane. There are tons of expectations for the Indian captain as the tour is seen as the one which ends India’s Test series drought in Australia. India will play three T20Is, four Tests and three ODI matches on this tour. This is thus the perfect chance for Kohli to breach the 1000-run barrier in a single tour which he narrowly missed in South Africa and England.

Virat ended the South African tour with 871 runs out of which he scored 844 runs in the ODIs and Tests. He made 27 runs in the two T20Is and had to sit out of the final game with an injury. During the Europe tour after the IPL, Kohli aggregated 903 runs including his scores in Ireland. He bagged a duck in the final innings on that tour when he needed 97 runs to accomplish the 1000-run milestone. Given the way Kohli has batted recently, he could well make a rare achievement on the Australian tour. 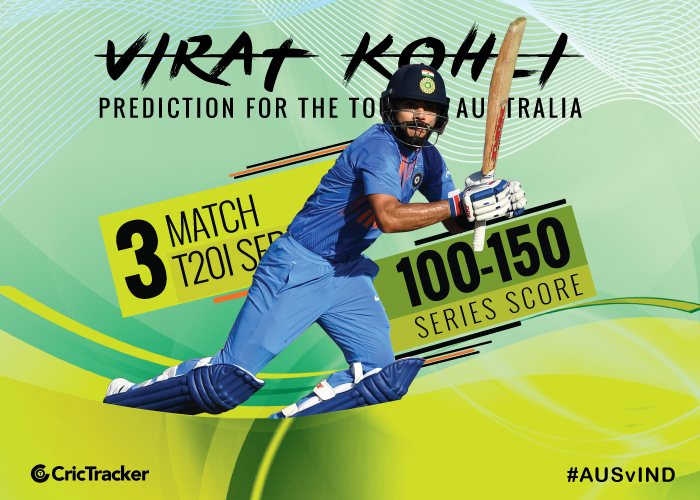 Overall in the last one year, Kohli hasn’t managed to make a big impact in the T20I format. This is also a reflection of his batting position. The Indian skipper pushed himself to No.4 position to allow KL Rahul to bat at 3. With the likes of Rohit Sharma, Shikhar Dhawan and Rahul in the top three, Kohli gets to face fewer balls. This could well continue in the three-match T20I series and Kohli would end up aggregating between 100 and 150 runs.