Let’s dive deep into India's numbers while chasing and try to figure out the potential areas of improvement which can be targeted in the series against Sri Lanka.

59/3, 80/3, 67/2 — These were India’s scores after the first Powerplay in the three ODIs which they lost chasing since the 2019 World Cup. Compare that to India’s scores after the first 10 overs in the three matches which they won — 61/0, 59/0, 83/1 — and you’d see a clear pattern. We’ve already looked at India’s numbers while batting first in ODIs since the 2019 World Cup. Let’s now dive deep into their numbers while chasing and try to figure out the potential areas of improvement which can be targeted in the upcoming series against Sri Lanka.

To start off, let’s first see where India stand with respect to the other teams as far as chasing is concerned. West Indies and England have pretty dismal records while batting first (1/6 and 2/5 respectively), but chasing is where they turn the screws. Both the teams occupy the top two positions with respect to the most number of wins while chasing in ODIs since the 2019 World Cup — 9 out of 14 and 8 out of 11 respectively. New Zealand, Pakistan, and South Africa all have more wins than losses while chasing as well. India meanwhile, have had mixed results. Perfectly mixed, in fact, winning 3 and losing 3 out of the 6 completed games where they’ve chased. 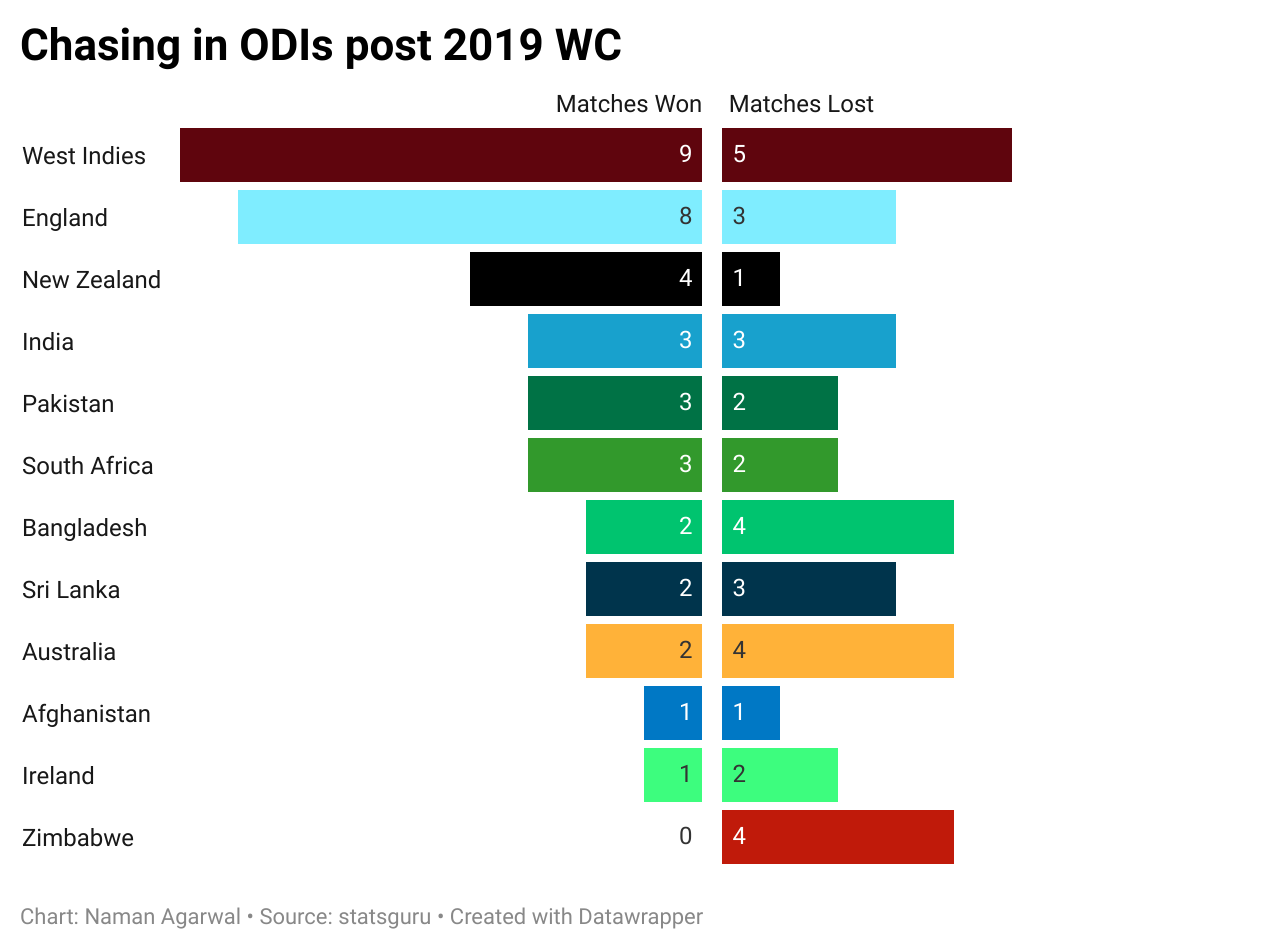 Ireland are so far ahead in the average runs conceded in wins, because they have won only one match. Similarly, with an average as high as 345, you’d expect the number of losses to be one, or at the very worst, two. But India have lost 3 games chasing, at this absurdly high average. While it augurs well for them that they have the firepower to chase down big totals consistently, they need to somehow make sure that those totals don’t go from big to humongous regularly.

England meanwhile, have won 8 out of the 11 games they’ve chased in this period. But they’ve won only 2 out of the 4 games where they had to chase 300 plus. Once again highlighting, that their approach may be attractive and very effective when it comes off, but it is not a golden egg which all teams need to run behind.

Let’s now try to breakdown India’s numbers in the six games where they’ve chased since the 2019 World Cup and identify patterns and potential areas of improvement.

The biggest point of difference between India winning and India losing while chasing has been the wickets lost in the first 10 overs. The following chart shows the Balls per Wicket for India while chasing in ODIs since the 2019 World Cup and the monumental difference in heights of the dark blue the light blue bars of the 1–10 overs phase is hard to miss.

While the need to maximize the Powerplay is perfectly understandable, especially in run chases as high as India have been subjected to, they need to mix caution with aggression. Shikhar Dhawan and Prithvi Shaw should, in all probability, open for India in all three matches. We’ve already talked about how this is a chance for Prithvi Shaw to cement his place as the back-up opener by providing those attacking starts while batting first. If he can control his instincts just enough and not get flustered by scoreboard pressure while batting second, India would feel that they have ticked one very important box for the series.

Dot ball Percentage and Strike Rotation Percentage are two of the most important metrics to keep track of in limited overs, and they only assume greater importance in run-chases. The chart below shows the Dot Ball Percentage of India while chasing in ODIs since the 2019 World Cup.

Quite expectedly, India have played a significantly higher number of dot balls in each phase in matches which they’ve lost. This is one area that Dravid and co. will have their eyes on in the three upcoming matches against Sri Lanka. While the difference in the first two phases is of 5% each, implying 3 more dot balls each in the first two chunks of 10 overs, it starts getting problematic from the 21st over onwards.

This is where numbers 4 to 6 have their task cut out. They need to be dynamic batsmen with multiple gears. Currently, three of Shreyas Iyer, KL Rahul, Rishabh Pant, and Hardik Pandya occupy those spots in the full-strength Indian ODI team. While that group is hard to break into, this series will provide an opportunity to the likes of Manish Pandey (one final flourish?), Ishan Kishan, Sanju Samson, and Suryakumar Yadav to show their middle-order mettle and keep the first-choice players on their toes.

The following chart shows the Strike Rotation Percentage for India in the said period. It simply calculates the percentage of balls that were non-dot, non-wicket, and non-boundary balls. While the difference in strike rotation has been negligible in the first ten overs, it starts becoming noticeable post-Powerplay.

India have lost the matches where they’ve not managed to rotate strike in the middle overs while chasing. Lower strike rotation and higher number of dot balls in the 11–40 over phases increases the pressure on the chasing team and what results is the significantly lower balls per wicket in the final phase of the chase (see the third chart), where batsmen are compelled to go all out because of the mounting pressure, and fall in the process.

There’s an alternate approach too, of not worrying too much about the dot balls and rotation of strike, and instead focusing on the boundary hitting. This approach is best used by teams like West Indies and England. West Indies’ strike rotation percentage doesn’t cross 50 in any phase after the first ten overs in wins. England’s crosses 50 in only the 31–40 over phase. Yet, they have won more games chasing and that’s because all of their batsmen are naturally powerful boundary-hitters. Indian batsmen are generally not.

Hence, it becomes imperative for them to focus on minimizing the dot balls and maximizing the rotation of strike. Manish Pandey and Suryakumar Yadav will need to take lead in ensuring that the scoreboard keeps ticking in the middle overs of run chases in the coming games.

Finally, let’s look at how often India have hit boundaries in different phases of run chases and how it has affected their results. The following chart shows India’s Balls per Boundary while chasing in ODIs since the 2019 World Cup. While the 1–10 overs phase and the 21–30 overs phase are almost identical in this regard, there are pretty big differences in the other three phases.

The 50% higher Balls per Boundary in the 11–20 overs phase in wins is probably down to the fact that after getting solid, wicketless starts (in 2/3 games), the batsmen have decided to consolidate the position of strength and cut down on the risks. While that is justified, India needs to be mindful of not going into a lull in this phase. This is one area where India’s captain for the tour, Shikhar Dhawan needs to work on. We have seen in the last couple of IPL seasons how he has added another gear to his game. It’s time to see that in the India colors now.

With most of the first-choice players missing from this tour, it is a huge opportunity for the new guys to raise their hands up and possibly bring something new to the table. India as a batting unit is pretty settled and has been doing well over an extended period, across conditions. The doors to the top 7 of India’s ODI XI are currently shut. If one or two players from this squad manage to even get their knocks heard, it will be mission accomplished.