Will Pakistan be able to repeat their last year heroics?

The arch-rivals India and Pakistan will be meeting on Wednesday for the Asia Cup encounter. This is the first time that these two nations will be playing each other since the end of Champions Trophy in 2017. There is already a lot of buzz about this match and so many eyeballs around the world will be watching the game keenly.

With a good two days off, the Men in Green will be going into this game fresh, unlike India who will be playing on consecutive days. Pakistan played their best XI in their previous game against Hong Kong. After thumping the qualifying team to start their campaign they will be hoping to continue in the same vein against India.

Here we bring you Pakistan’s predicted XI for the match:

Without a second thought, Pakistan will go in with Fakhar Zaman and Imam-ul-Haq as their opening combination for this crucial encounter. This left-handed duo has been giving some solid starts to the side in the recent times. Both of them would be very eager to come good against a side like India.

Fakhar looked good for his brief 24-run knock off 27 balls in the previous game. However, he should be aiming at converting these starts into something substantial. Given that the openers get the side off to a good start, the other batsmen can feast on it later in the innings. Imam with an unbeaten half-century was equally impressive and has got some decent time in the middle before the big game.

The middle-order will constitute of Babar Azam, Shoaib Malik followed by the likes of Sarfraz Ahmed and Asif Ali. The 23-year-old Babar Azam will continue to bat at number three. He showed positive intent in the match against Hong Kong and also went past 2,000 ODI runs in 45 innings, the joint second-fastest in ODI cricket history.

Shoaib Malik, the batting all-rounder, who is probably playing his last Asia Cup had a brief stay in the middle in the last game which should make him feel confident. He is more than handy with the ball and should be playing a big role on the slow UAE pitches. The Pakistani skipper and Asif Ali didn’t have much to do with the bat in the teams’ tournament opener. However, they will have a role to play in the high-octane clash.

Shadab Khan would be very crucial for the encounter against the neighbouring nation. With two wickets to start the tournament off, the leg-spinner will be raring to go into the next game. Also, his services with the bat could be critical if the game goes deep.

Faheem Ashraf will be the other all-rounder in the XI. With the reverse swing component coming in a lot on the rough, dry pitches in this tournament, Ashraf will have to role to bowl a few cross-seamers in the middle-overs to roughen up one side of the white cherry. The 24-years-old is known to hit some great lengths very often and should focus on curtailing the runs after the powerplay.

Hasan Ali and Usman Khan have already begun the mental games for the encounter against India. These two went on record to make statements that they are eager to do well in the upcoming match. Usman was absolutely on fire against Hong Kong and kept troubling the batsmen with the pace and bounce that he extracted off the pitch. He would be high on confidence. Although he walked off the field, he is deemed to be fit for this match.

Hasan Ali too picked up a couple of wickets and didn’t look to be rusty by any means. While the other two pacers are going all guns blazing, Mohammad Amir is not having an ideal time in the last few games. It’s been a while since he picked an ODI wicket and will be craving to get amongst the wickets column against the arch-rivals. 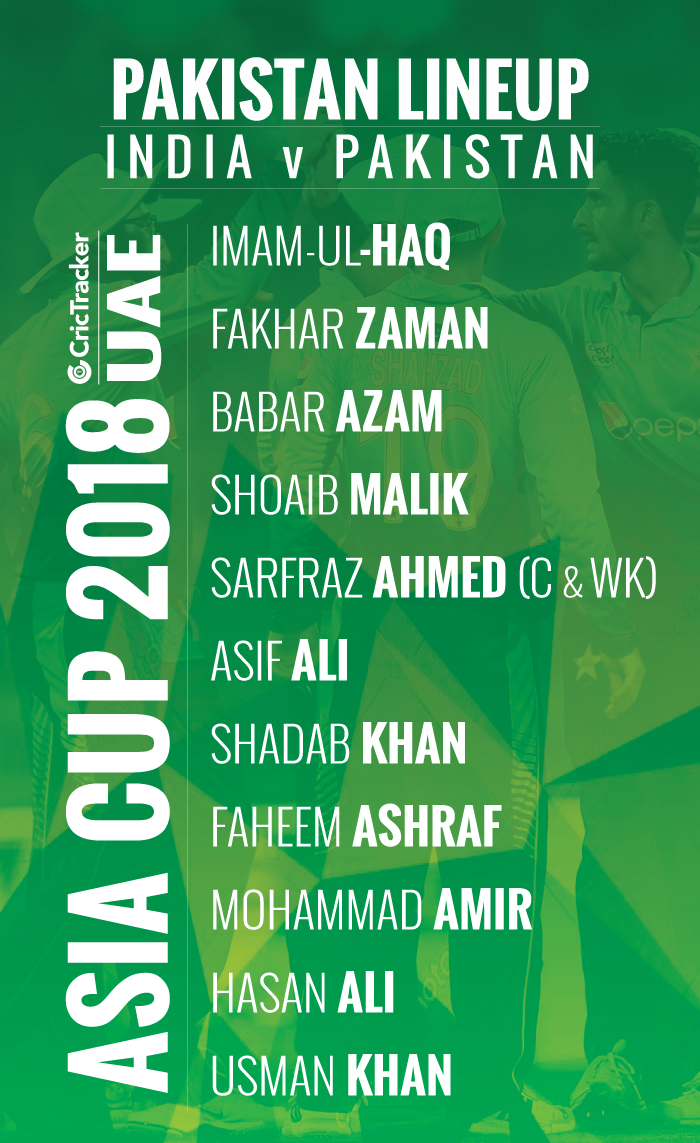