Asia Cup 2018: Match 5, India vs Pakistan, Match Prediction - Who will win the match, India or Pakistan?

Asia Cup 2018: Match 5, India vs Pakistan, Match Prediction – Who will win the match, India or Pakistan?

One of the greatest cricketing spectacles of all time, which unfortunately doesn’t occur too often these days, will be taking place on a hot and steamy Wednesday afternoon in Dubai. It’s the battle between the arch-rivals India and Pakistan in the Asia Cup 2018 and the entire world will pause for a while to witness their feud.

The last time these two sides met in the Champions Trophy final in England, Pakistan outplayed Virat Kohli’s troops. While that sent one nation into massive celebrations, the other set of the crowd didn’t appreciate the Indian performance. The Men in Blue would be seeking for vengeance in this encounter.

The Men in Green seem a lot more formidable than they did a couple of years ago, but one interesting facet about them is their unpredictability, which hasn’t vanished as of yet. Virat Kohli‘s absence will have an impact on the Indian side, but that will not take away any of the entertainment that this game promises.

Both sides have some pretty phenomenal bowlers, which should have a big role to play on this slow track. The temperatures in Dubai will be on the higher side, which should keep the track on the drier side. A 300-per side encounter is certainly not on the cards and the batters should work really hard to get a score in excess of 270.

The skipper Rohit Sharma and Shikhar Dhawan will be opening the innings as always, with Ambati Rayudu coming in at number three. KL Rahul might have to wait for his chance. Dinesh Karthik, Kedar Jadhav, MS Dhoni and Hardik Pandya will be comprising the middle order.

India might be bringing in a couple of important players for this big game. Khaleel Ahmed and Shardul Thakur will have to make way for Hardik Pandya and Jasprit Bumrah. All eyes will be on Kuldeep Yadav and Yuzvendra Chahal as they are the strongest weapons Rohit has at his disposal.

They certainly enter the contest as the strongest of both sides. The in-form pair of Imam-ul-Haq and Fakhar Zaman will continue in their opening position with Babar Azam, Shoaib Malik, Sarfraz Ahmed, Asif Ali and Shadab Khan coming in the middle order.

Usman Khan impressed everyone in the first game and can be a dark horse for this contest as all the limelight will be hogged by Mohammad Amir and Hasan Ali. Shadab Khan and Faheem Ashraf are the other bowling options for the Pakistani skipper. 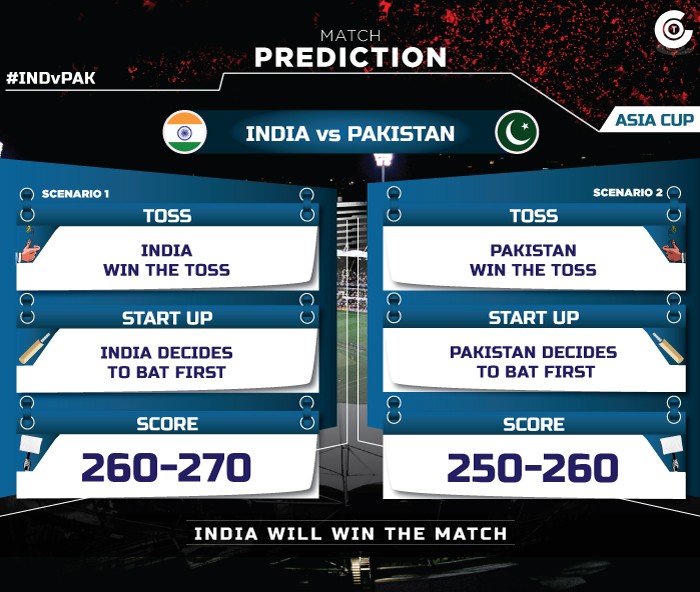