After a pretty embarrassing performance against Hong Kong in their Asia Cup opening game, India managed to annihilate the arch-rivals Pakistan and regained the confidence as the favorites to win the trophy. They will now face an intriguing battle against Mashrafe Mortaza’s Bangladesh, who are eager to win the trophy for the first time in their history.

Indian batting order still doesn’t seem settled, but their consistent top order is covering up for the small loopholes existing in the middle. Rohit Sharma’s blazing knock against Pakistan will give him an awful lot of confidence and despite scoring a century in the final Test against England, KL Rahul might have to wait for another few games for his chance.

Bangladeshi management seemed pretty upset with the Asian Cricket Council pre-assigning them with the second position in the Group Stages. But that pretty much doesn’t count as anyways, each of the four teams has to face against each other. This will be a bit closer than what people expect as the Tigers are a much better unit than they were last time.

Nothing is expected to change in Dubai, temperatures high and the pitch to remain dry. A 300-plus total seems highly unlikely and another low-scoring thriller might be on the cards.

The skipper Rohit Sharma and Shikhar Dhawan will be opening the innings as always, with Ambati Rayudu coming in at number three. KL Rahul might have to wait for his chance. Dinesh Karthik, Kedar Jadhav, MS Dhoni, and Ravindra Jadeja will be comprising the middle order.

Hardik Pandya’s injury might pave way for Ravindra Jadeja and barring that, no changes are expected in the playing XI. All eyes will be on Kuldeep Yadav and Yuzvendra Chahal as they are the strongest weapons Rohit has at his disposal.

Liton Das will be opening the innings alongside Nazmul Hossain as Tamim Iqbal will no more be featuring in this tournament. Shakib Al Hasan and Mushfiqur Rahim will be back in the XI and following them in the middle order will be Mohammad Mithun, Mahmudullah and Mosaddek Hossain.

Skipper Mashrafe Mortaza will be keen to deliver a good performance with the new ball and Mustafizur Rahman will be back in the playing XI. Rubel Hossain, Mosaddek Hossain, and Mehidy Hasan are the other bowling options for Bangladesh.

The prediction is for India to win the game comfortably and extend their impressive record against the Tigers. 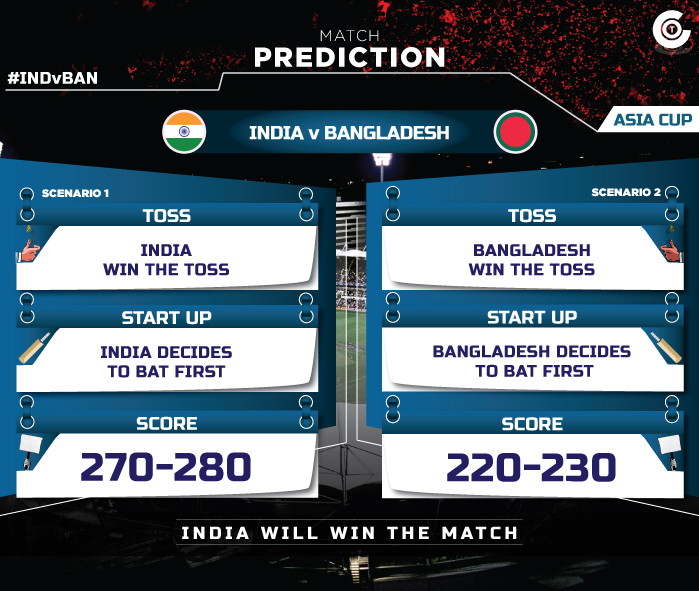