The coach and the captain will be pondering to make a change to the line-up again.

Pakistan scraped through to the victory against Afghanistan and were tested to the hilt by the fast-improving Asian team in Abu Dhabi. But one would feel that they needed such a game after a dispiriting outing against the arch-rivals and the team will be up for the clash which matters now. The Super Four clash between India and Pakistan will eventually decide which side will book the spot in the final first as both the teams have won a game each.

The fielding of the team was below-par the other night and Sarfraz Ahmed must’ve noticed it. He admitted of being shaken after the way Afghanistan played against them and should be better prepared for the marquee game on Sunday. The changes they made to the team were a bit questionable but will they stick to the same combination? They didn’t have a perfect game which might prompt Mickey Arthur and Sarfraz to make more changes to pull one back on India.

Here we bring you Pakistan’s predicted XI for this big game:

What has happened to Fakhar Zaman? The batsman who plundered runs against Zimbabwe is suddenly struggling against quality oppositions. The left-hander is yet to get off the mark in the last two matches and he will be gutted to not review the umpire decision against Afghanistan. Fakhar will be under pressure now when he will face the accurate Indian pacers upfront.

Imam-ul-Haq showed immaculate maturity when the odds were stacked against him. His technique while playing the spinners was superb and an extended stay in the middle on Sunday will surely make the Indian spinners feel uncomfortable.

Babar Azam once again proved why is so crucial to Pakistan’s fortunes going forward. An early wicket had left them reeling in the chase but Babar’s calmness came to the fore and they were bossing the game after a few overs. His ability to rotate the strike in the middle overs makes him important and should continue to bat in the same vein in the next game. Haris Sohail looked under-cooked and should get another opportunity to showcase his talent against India.

Shoaib Malik, the finisher was on show when it mattered the most. His composed demeanour throughout the nervy moments in the dying stages of the game clinched the thriller for Pakistan. He looked good against India as well last time around and the veteran will be key for his team yet again. Sarfraz Ahmed averages less than 15 since Champions Trophy last year and has to contribute significantly to the team’s cause. His captaincy is exceptional and controls the proceedings very well.

Asif Ali’s six was immensely important for Pakistan but the youngster needs to show some maturity of taking the single even in his such crunch situations and should learn fast with the World Cup approaching fast.

Shadab Khan is expected to be fit for this huge game. The leggie failed the fitness test to miss the previous game and Pakistan missed him a lot against Afghanistan. More than his batting, the team would be wanting him to bowl ten probing overs and trouble the Indian batsmen. Shadab got the wicket of Rohit Sharma off the very first delivery and would love to repeat the same feat again.

Mohammad Amir should continue to sit on the sidelines with the youngster Shaheen Afridi doing well on his ODI debut. The 18-year-old cranked up 140 kph pace with the ball and will be tipped to give a tough time to the arch-rivals. But he will have to improve his fielding and the team management must’ve had a chat with him regarding the same.

Usman Khan has had two average outings now. He struggled again the other night and Pakistan can’t afford for him to lose confidence. His new ball exploits are known to everyone and once the left-arm fast bowler finds his zone it will be extremely difficult for the batters to score off him. Hasan Ali too hasn’t been up to the mark. An improved show is a must for Pakistan’s famous pace attack. 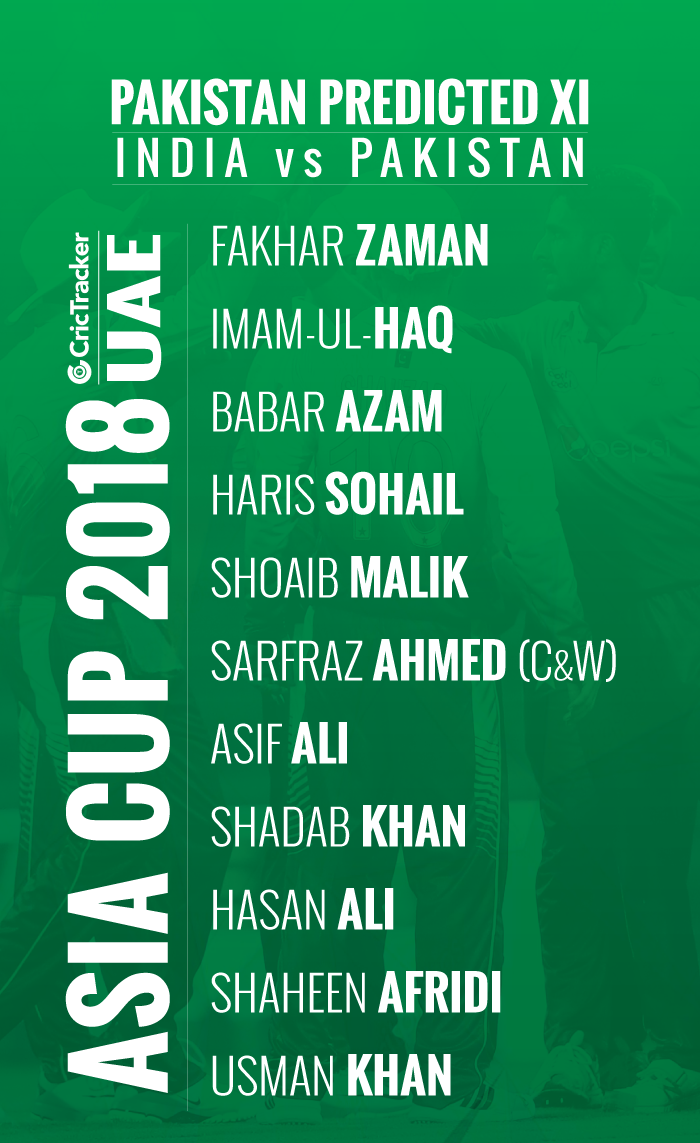