Will India make any changes for the inconsequential game?

Team India led by Rohit Sharma is playing some exceptional cricket in the ongoing Asia Cup. They have sealed their place in the final already after an easy win against Pakistan. The next challenge for them is Afghanistan who have been knocked out of the tournament unfortunately despite playing extremely well. Asghar Afghan and his troops will be itching to put up yet another fighting show before bowing out of this edition’s Asia Cup.

The Men in Blue, on the other hand, wouldn’t want to make a mistake of taking the opposition lightly after what transpired against Hong Kong not so long ago. Afghanistan are an even better team and they also must be hungry for victory after losing a couple of close encounters. However, India would want their batsmen, especially the middle-order, to be tested to the hilt ahead of the final where they will face either Pakistan or Bangladesh.

Here we bring you India’s predicted XI for this match:

What will one say about this opening duo after the last match? Both have been scintillating form and have played their shots nonchalantly to blow the oppositions away so far in the tournament. Rohit Sharma has been taking time early on which has worked for him and a similar approach could be expected for this game as well.

Shikhar Dhawan transforms completely as a batsman when it comes to the limited-overs format. It has been a clinical show from him and has played chanceless knocks so far. With two centuries under his belt, the left-hander will only look to add to his tally but both the openers will have to be careful of the fact that they haven’t faced a spinner yet early in their innings in all the matches and Afghanistan will unleash Mujeeb Ur Rahman with the new ball.

Ambati Rayudu has fairly impressed in the limited opportunities so far in the Asia Cup. He looks the favourite candidate to nail down the number four spot in the lineup when Virat Kohli returns to the side. One would feel that he should get to bat for a bit long in this game so that the batsman gets himself ready for the final. KL Rahul might come in for Dinesh Karthik given that the game is inconsequential and he will have to prove himself in the only opportunity.

MS Dhoni and Kedar Jadhav have done better jobs when Team India has been fielding so far. The latter has been exceptional with the ball and the veteran’s wicket-keeping was never doubted. When it comes to the batting, they haven’t been much at it with the top-order doing the bulk of the scoring. The batting-order might be shuffled for this game only for this reason.

Ravindra Jadeja got a bit of reality check against Pakistan after making a dream comeback a game earlier. However, he offers much more in the field and should retain his place. There is a doubt if he will get to bat but the left-hander is here to stay and the selectors must be having a keen eye on his performances.

Jasprit Bumrah’s spell of 2/29 in ten overs was just brutal for the opposition the other day. He becomes unplayable when in the zone and is growing in stature as a fast bowler with every passing game. Bhuvneshwar Kumar might be rested for this game for the final and the team management will be thinking of testing Khaleel Ahmed who was exceptional against Hong Kong.

The spin-twins have been quietly doing their job in the middle overs for the team. They have been economical as well and should continue to play more matches with the World Cup looming large. However, the consistency is what matters which the team will be expecting from them. 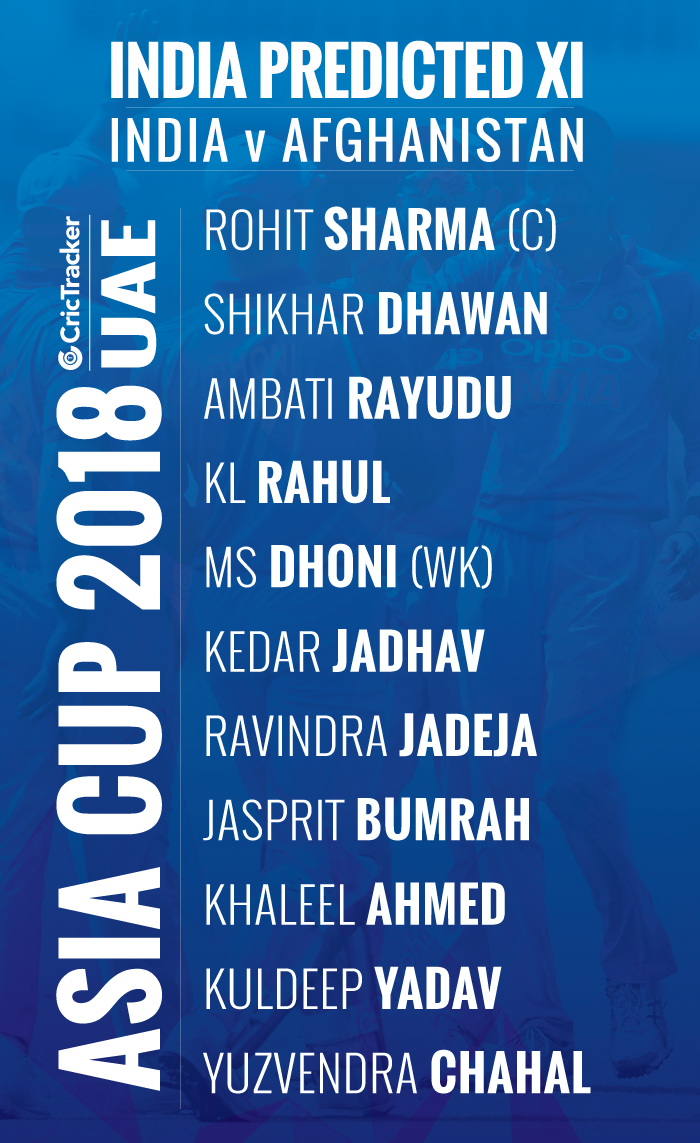