Australia in World Cup: Five titles make them the most successful team by far

The Aussies are the defending world champions.

Australia have an enviable record in World Cup cricket although they were not the favourites always. They had come to the sub-continent to play the 1987 edition as underdogs but returned as the champions and that had changed the course of their history. After winning their maiden WC title, Australia went on to win four more trophies in a span of 28 years, which is more successful than any other team in history. They also have a treble of winning the cup (1999, 2003 and 2007). In 2015, Australia won their fifth title and it was the first at home. They have played two other finals that they lost (1975 and 1996).

This year, Australia are not been seen as favourites blindly but they certainly have shown a lot of character in the recent series against India and Pakistan. Australia have played 83 matches at the WC since 1975 and won 62 of them while losing only 19. Two matches were non-conclusive. In 2019, Australia will play their first game against Afghanistan in Bristol on June 1.

Here we take a look at Australia’s results in all 11 editions of the WC played since 1975: 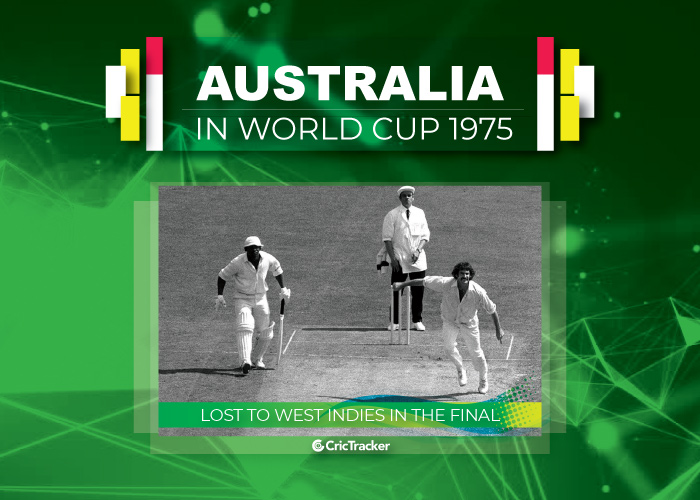 Ian Chappell was the captain of the Australian side in the inaugural World Cup while his brother Greg was the vice-captain. Australia were clubbed with the West Indies, Pakistan and Sri Lanka in Group B and they won two and lost one game. They started off with a 73-run victory over Pakistan at Leeds with speedster Dennis Lillee taking a five-for.

The Kangaroos then beat a spirited Sri Lanka by 52 runs even after scoring 328 for 5 with Alan Turner hitting a hundred. Australia then lost the final group game against eventual champions West Indies by 7 wickets after getting bowled out for 192.

Chappell’s side then had a scare even after bowling out England for 94 in the semi-final and won the game by 6 wickets. In the final, Australia competed well with the Caribbeans and fell short of their steep target of 295 by just 17 runs with Ian scoring 62.