India is expected to start the ODI series with a comfortable win over the home team Australia.

The 3-match ODI series between Australia and India will kick off on Saturday at the Sydney Cricket Ground where India claimed their historic maiden Test series win in Australia earlier this week. They have the One-Day International specialists coming in of which a couple of them haven’t been on the field ever since the T20I series played prior to the Test series. Team India has rested Jasprit Bumrah owing workload which makes the home team batsmen feel better.

For India, the focus will be on MS Dhoni who hasn’t played any cricket since the home ODI series against the Windies in October and wasn’t amongst runs in 2018. The Australians, on the other hand, have a new top three in form of captain Aaron Finch, keeper Alex Carey and Usman Khawaja. Their bowling attack also has a new face with Peter Siddle’s comeback to the ODI team after a long wait and Nathan Lyon’s inclusion.

The first game of the 3-match ODI series between Australia and India will be hosted by the Sydney Cricket Ground.

Average first innings score at the SCG in the last five ODIs is 327. The lowest among these five ODIs was 302 scored on a slower track during the game between Australia and England last year. The track used for recent Test match between Australia and India was nothing but a perfect batting track. Expect the same surface for this ODI.

KL Rahul and Hardik Pandya ruled out of the first ODI (as per reports).

Rohit Sharma has three centuries from the seven ODI innings as an opener against Australia in Australia. In these seven innings, Rohit has only once been dismissed for less than 30. He has scored 613 runs at an average of 102.16 in those seven innings. His scores read 138, 34, 171*, 124, 6, 41, 99. Rohit has gained a name of scoring big on days that are associated with a personal life event.

He scored back to back tons in Australia soon after his marriage in 2016 and struck a double ton on his 2nd marriage anniversary in 2017 while leading the team.

Rohit followed it with the fastest T20I ton a day after his wife’s birthday. The Indian vice-captain is returning from the birthday of his daughter and is expected to produce another big inning against the Aussies. For this to happen, Rohit has to see through the left-arm pacer Behrendorff who is the only real threat for him among the home team’s bowlers.

Virat Kohli had a record-breaking 2018 in the ODI format and is expected to continue his sensational run. He has struck centuries in the first ODI of 2017 and 2018. One would expect the same from the Indian captain and keep him as a multiplier. Rohit’s record against Australia has to be considered and it also makes him a choice as a multiplier while his opening partner Shikhar Dhawan will be hoping to make it big having missed out from the Tests after a brilliant T20I series. 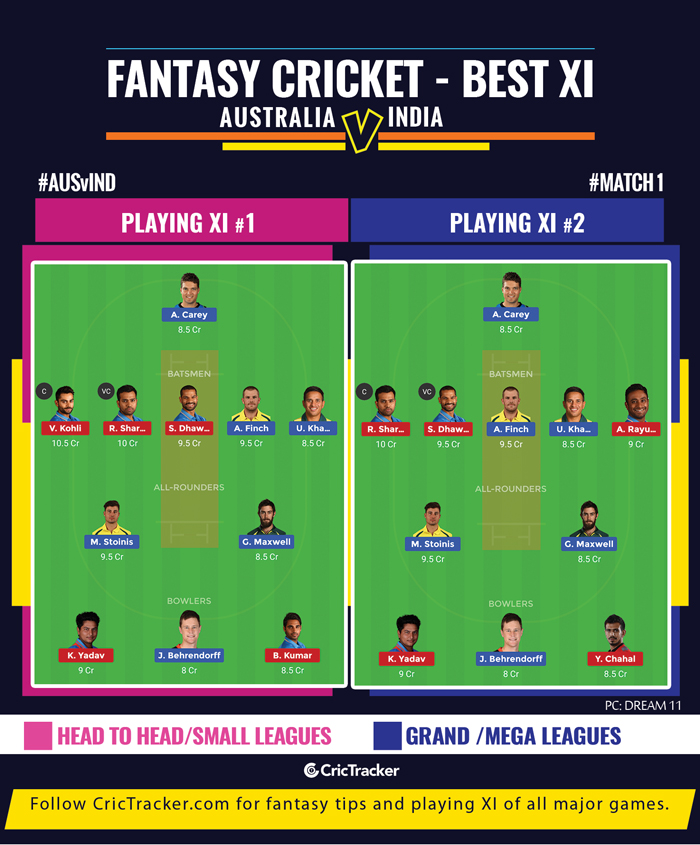 Given it will be a proper batting track at the SCG, stuffing your team with the top three from both the teams won’t be a bad idea. On a good day, India’s top three collectively play for at least 2/3rd of the total overs leaving not a lot for the others to do.

India is expected to start the ODI series with a comfortable win over the home team Australia.