Team India is expected to bounce back and level the ODI series with a comfortable win over Australia.

The 2nd ODI at the Adelaide Oval will be a do-or-die game for India who have to win the game to keep the ODI series alive heading into the final game. India could make a few changes to their playing XI to adjust their team balance after the exit of Hardik Pandya which stopped them from playing Yuzvendra Chahal in the first match. Australia doesn’t have much of a worry after the first ODI except getting a sense of urgency in their batsmen and to secure 20-30 extra runs.

Going by the recent trend, the Adelaide Oval could be a seam-friendly entity. If that happens, India could find themselves in trouble due to the fragile middle-order. If more than one of their top three gets out in the first ten overs, they could soon be pushed into a state where playing 50 overs becomes a parameter rather than scoring runs at a quicker rate. Australian bowling is capable enough of putting India under pressure once again like in the first ODI.

The second game of the 3-match ODI series between Australia and India will be hosted by the Adelaide Oval.

The game will be live on Sony Six and Sony Six HD in India. (Live streaming on Sony Liv)

The two recent ODI matches hosted by the Adelaide Oval indicate that the Australia-India ODI could well be a low scoring one. In 2018, the venue hosted two ODIs and both of them produced scores under 240. The track acted as seam friendly on both occasions helping the home team’s long bowling-attack. The short square boundaries here provide the under pressure batsmen a relief.

Since the start of 2018, MS Dhoni has scored 326 from 14 innings at an average of 27.16 and a strike-rate of 67.77. His batting strike-rate is 6th lowest among 84 players who have batted more than 300 balls in this span. No other player from top seven ranked players has a SR less than 73 in ODI format in this span.

With so much criticism surrounding Dhoni, not many will be interested in picking the former Indian skipper. Alex Carey has been selected by nearly 57% of fantasy teams compared to 43% who’ve gone for Dhoni. If the pitch has something in it, Carey might be in trouble against the Indian pacers early while Dhoni assures at least 20 odd runs given his recent record.

Despite a couple of low scores from Virat Kohli on this tour, the Indian captain has to be the captain or at least vice-captain of a fantasy players’ XI. Kohli has a brilliant record with the bat at the Adelaide Oval and is expected to bounce back with a big knock since it is a do-or-die game. On the contrast, Rohit has a poor record here; the only venue where he has been troubled in Australia.

In our fantasy guide for the first match, we had stressed the fact that Rohit has to start as captain. It was mainly due to Kohli’s poor record at the SCG in ODI cricket and the move worked for anyone who accepted it. The Indian limited-overs vice-captain still remains a crucial multiplier pick given his recent form and record against Australia. Marcus Stoinis will be a perfect alternative for these two roles. Anyone from Australia’s pace attack can also be picked up as vice-captain. 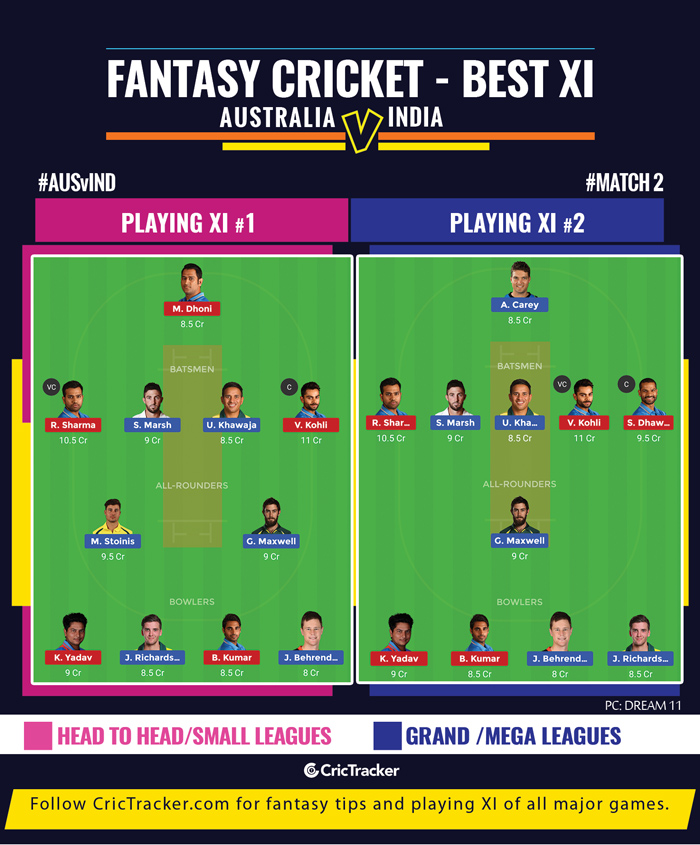 Only six players are assured of a spot in India’s playing XI for the Adelaide ODI – Kohli, Rohit, Dhawan, Dhoni, Bhuvneshwar and Kuldeep. Despite a poor game of sorts, Rayudu is likely to retain his place. Karthik, Jadeja, Khaleel and Shami will get a go depending on the pitch and requirement of an extra bowling option.

Team India is expected to bounce back and level the ODI series with a comfortable win over Australia.