The pitch is Adelaide is known to help the spinners.

Very few had given Australia a chance to take a lead in the three-match ODI series against India after what had transpired in Tests. But Jhye Richardson‘s heroics ably supported by the other bowlers and the batsmen playing sensibly helped them trump the visitors in Sydney. The action now moves to Adelaide where the Men in Blue won the first Test match and would love to level the series at the venue.

The must-win scenario, more often than not, brings the best out of the Indian team. Their top-order’s failure gave some valuable time for the middle-order, especially MS Dhoni, in the middle. Dinesh Karthik botched up yet another chance to seal his place and needs to make the most of this series now. Also, the likes of Shikhar Dhawan and Virat Kohli will be eager to get going after a rare failure even as the death overs bowling also needs to be improved.

Australia will be delighted to find themselves ahead in the series but even they know that the team is far from best at the moment. The batting is not up to the mark and a better approach from them could’ve seen them post the total in excess of 300. The fresh bowling attack did wonders for them and it was quite evident with the way the likes of Richardson and Jason Behrendorff bowled.

Teams batting first have won 46 matches out of 84 at the Adelaide Oval so far. The pitch tends to slow down and help the spinners as the match progresses and it goes without saying that the team winning the toss will choose to bat first. As far as the conditions in Adelaide is concerned, it will be extremely hot with the temperatures hovering close to 40 before cooling down a bit late in the evening.

Australia have little to worry after their exceptional performance in Sydney. Their batsmen were spot on and maybe have to score a little more quickly in the middle overs. Aaron Finch and Alex Carey should look to get the team off to a good start while Shaun Marsh and Usman Khawaja have to make the most of the starts now. Glenn Maxwell might get promoted to up the ante with Marcus Stoinis also in great form and provide finishing touches.

Richardson will be once again in the spotlight with Behrendorff and Peter Siddle assisting him. Nathan Lyon might get replaced by Adam Zampa after a not so decent outing at the SCG with Maxwell and Stoinis also rolling their arm.

India is not a team which makes wholesale changes just after a solitary loss. Dinesh Karthik will be under pressure to perform and even Kohli and Dhawan would love to get some runs under their belt. Ravindra Jadeja needs to contribute more with the bat and improve his batting against the short ball. Bhuvneshwar Kumar and Mohammed Shami did well early on but conceded at the death. Even Khaleel Ahmed was expensive which might see Mohammed Siraj making his debut as well.

The prediction is for Team India to win the contest and level the series. 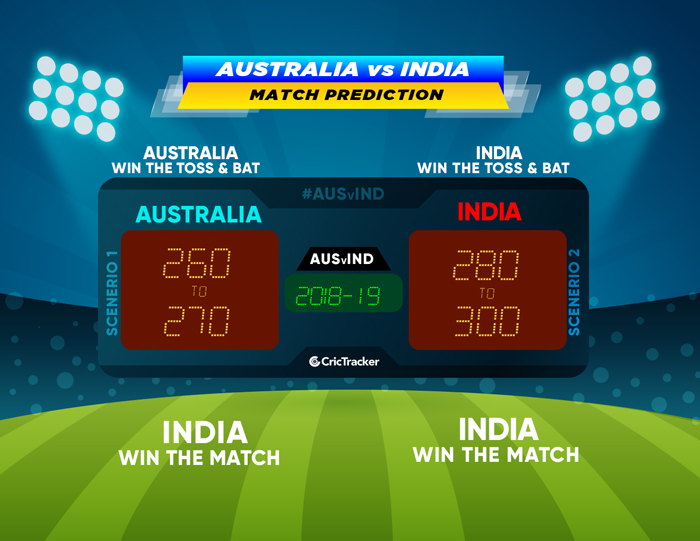