Mitchell Starc won't be available as he will be away attending his brother's wedding.

Australia made an absolutely resounding start to their three-match T20I series against Sri Lanka. At the renowned Adelaide Oval, the hosts, led by Aaron Finch, won by a colossal 134 runs and took a 1-0 lead. It was a thorough domination for the Men in Yellow as not a single player from the opposition could show fight. Losing only two wickets, Australia amassed a humongous 232 for two.

The Lankans got themselves nowhere in the run-chase, losing wickets in clusters. They are eventually restricted to 99. The second T20I is a must-win affair for Lasith Malinga and Co and the crunch encounter will be played at the Gabba in Brisbane. Even as the Aussies have won three out of their four games at the stadium, the Lankans are yet to play a T20 International at the Gabba.

Out of four T20Is at the venue, three were won by the team, batting first. The average score in T20Is at the Gabba is 175. The average shoots up to 186 in the first innings. Hence, chasing on such a strip can turn out to be a risky affair. The conditions will be cloudy, but with no chances of rain. The temperature will be around 20 degrees Celsius with the humidity in the 50s and 60s.

The Aussies won’t have the services of Mitchell Starc, who will be away to attend his brother’s wedding. The left-hander is likely to be replaced by one of Billy Stanlake and Sean Abbott. Starc was a key performer last time with figures of 4-0-18-2. The rest of the hosts’ bowling also fired. Adam Zampa was the standout, having picked up three wickets, conceding 14 runs in his four overs.

The leggie got good support from Ashton Agar. Kane Richardson will want some wickets after going wicketless in the previous game. The batting is in great form. David Warner’s confidence would’ve skyrocketed after his maiden T20I century. Skipper Aaron Finch also looked in excellent tough. Glenn Maxwell was unstoppable as well. The likes of Smith, Carey and Turner can also hit the long ball.

The Lankans have plenty of thinking to do. They may bring back Niroshan Dickwella at the expense of Kusal Mendis, though it will be a tough call to leave the latter out. Their entire batting was shambolic in Adelaide and needs to make amends. In the bowling department, Shehan Jayasuriya could come in place of Kasun Rajitha. Jayasuriya is a handy prospect with both bat and ball.

Rajitha went for 75 last time after an impressive tour of Pakistan. Nuwan Pradeep was the only positive in their bowling as he gave away only 28 runs in four overs, albeit he couldn’t make a breakthrough. Even Wanindu Hasaranga, the Player of the Series in Pakistan, couldn’t stem the run-flow. Skipper Malinga had an off day as the veteran couldn’t get his yorkers on target consistently. 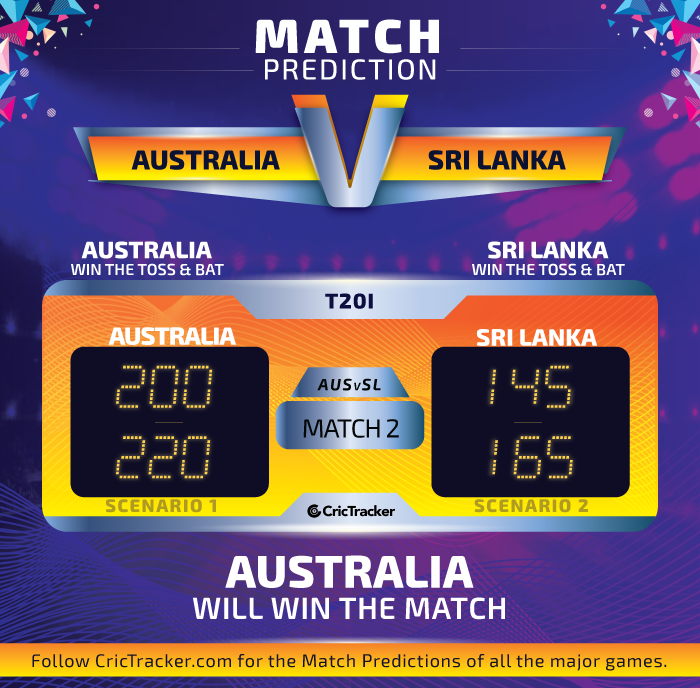