India Women and Australia Women are set to lock horns in the second game of the three-match ODI series on Friday, September 24 at the Harrup Park in Mackay. The first game on Tuesday was a one-sided affair as the Aussies went on to register a nine-wicket win and took a 1-0 lead in the series.

Darcie Brown, playing only his second ODI, bagged the Player of the Match award after his four-wicket haul on September 21. After being inserted in to bat first, India could only muster 225 runs for the loss of eight wickets. Mithali Raj scored 63 runs with three fours and top-scored for the Women in Blue.

Thereafter, Rachael Haynes, Alyssa Healy and skipper Meg Lanning scored half-centuries to accomplish the easy win for Australia. Haynes stayed unbeaten on 93 and scored 2000 ODI runs along with Healy. In the meantime, Lanning is a mere 22 runs short of 4000 runs in ODI cricket.

The pitch at the Harrup Park in Mackay was a decent one for batting. But the chasing team, Australia found it easier to bat on the surface in the first game. Batting second after winning the toss should be the way forward for the teams. The pacers are likely to get assistance from the surface.

Playing combination for AUS-W vs IND-W

Alyssa Healy has highly impressive numbers against India in ODI cricket. In 10 matches, the right-handed batter has notched 342 runs at an average of 48.85 with a top score of 133. In the previous game, she was circumspect to start with, but stepped on the gas later. She scored a run-a-ball 77 with eight fours and two sixes before Poonam Yadav dismissed her.

Jhulan Goswami might be at the fag end of her career, but she hasn’t run out of steam by any means. In the previous game, she couldn’t pick up a wicket, but was India’s most economical bowler. In 10 overs, she conceded only 38 runs at kept things tight at the top. If the veteran speedster hits the right channel, the Aussie batting lineup might face troubles. 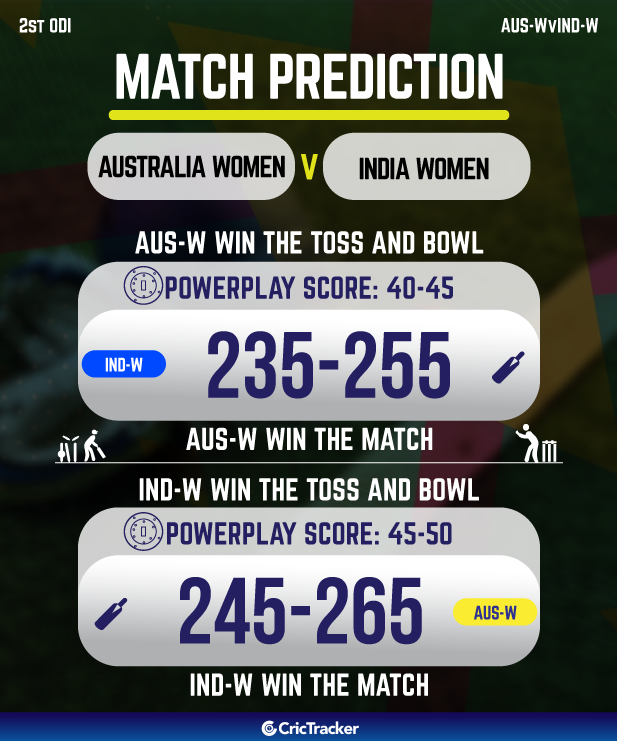