On Saturday, Tahlia McGrath and Sophie Molineux gave the Aussies a crucial 1-0 lead in the series.

India Women and Australia Women are set to lock horns in the third game of the three-match T20I series on Sunday, October 10 at the Carrara Oval in Queensland. The first T20I couldn’t take place due to rain, but the second match on Saturday, October 9, kept everyone at the edge of their seats.

After electing to field, Australia reduced the visitors to 81 for nine in 17 overs. Tayla Vlaeminck jolted India with the early wickets of Smriti Mandhana and Shafali Verma. From there on, the Women in Blue strained to find their feet. In the end, Pooja Vastrakar’s timely 37 took India to 118 for nine.

The Aussies had their moments of jitters in their run-chase. Shikha Pandey bamboozled Alyssa Healy with a delivery that shaped back to hit the stumps. With wickets falling at the other end, Tahlia McGrath came to the party. She stayed not out on 42 off 33 to help the Aussies to a four-wicket win.

The pitch at the Carrara Oval has been fairly good for batting and the batters can play their shots on the up without much fuss. But the bowlers, especially the pacers have got quite a significant amount of assistance from the surface. Chasing should be the way forward.

Playing combination for AUS-W vs IND-W

Alyssa Healy has been a fulcrum of Australia’s top-order for quite a few years. She also scored a match-winning half-century in the first ODI against India last month. On Saturday, she got off the mark in the very first ball after she pulled Shikha Pandey for a four. But then, the unplayable delivery got rid of her. She’ll be looking to make an impact next time.

Sophie Molineux was a tad expensive in the opening T20I, although she picked up one wicket. In the second game of the series, the left-arm spinner was back to her very best. She got the wickets of Jemimah Rodrigues and Renuka Singh. Moreover, she gave away only 11 runs and bowled at an economy rate of 2.75. Molineux didn’t give the batters much to work with. 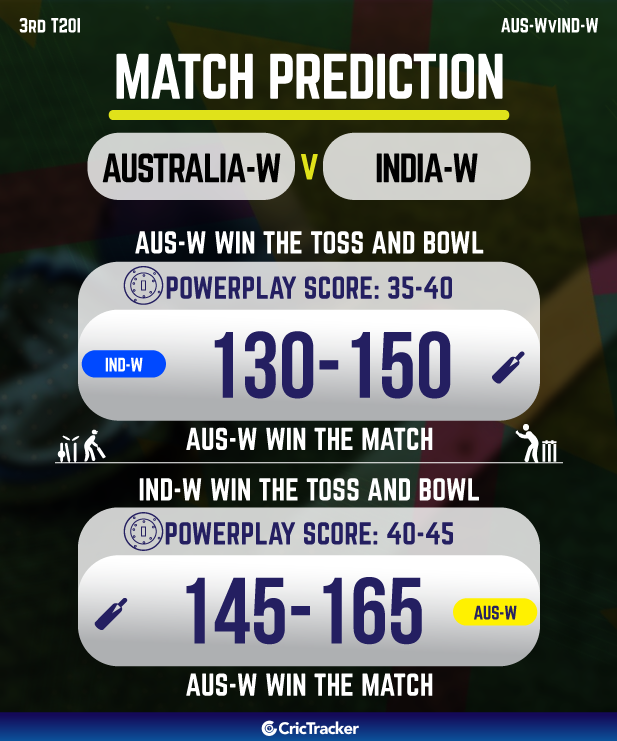