The Tigers' Legends are sitting at the bottom of the table with losses in all their three matches.

Bangladesh Legends, led by the legendary Mohammad Rafique, have been disappointing in the ongoing tournament. Having lost three games out of three, they are languishing at the bottom of the points table. The net run rate of -3.306 suggests their travails thus far.

Their next match is against the West Indies Legends on Friday, March 12 at the Shaheed Veer Narayan Stadium in Raipur. In their previous game against Sri Lanka Legends, they sparkled with the bat for a brief while but succumbed to the pressure of a tough run-chase.

The West Indies Legends, captained by Brian Lara, lost to the Lankans itself and need a victory to set their campaign running. Apart from Lara, the Caribbean unit also has the likes of Dwayne Smith and other enigmatic cricketers in their ranks.

The pitch in Raipur has been a belter for batting thus far. The track has had everything for everyone and the games have thus far been fairly exciting. Batting second should be the way forward for the teams. There are no chances of rain for the time being with the temperature around 30 degrees Celsius.

Playing Combinations for BANL vs WIL

Mohammad Rafique has been the standout performer for Bangladesh in the tournament. In the three games, he has picked up three wickets at an economy of 7.36. He got smashed in his very first over off Virender Sehwag, but he has managed to make a fair bit of comeback from there onwards.

Dwayne Smith was an explosive prospect with the bat in hand. And he showed his talent in the West Indies’ previous game against the Lankans. Batting in the middle-order, the right-hander scored 47 runs off 27 balls with four fours and three sixers. He is expected to fire on all cylinders next time as well.

The prediction is West Indies Legends to win the match. 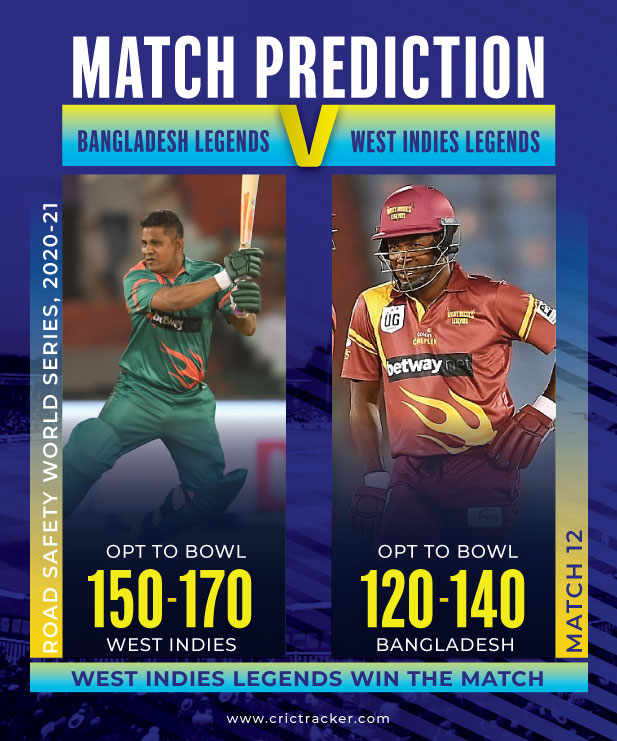