Bangladesh vs Windies, 2nd ODI, Match Prediction: Who will win the Match?

Bangladesh vs Windies, 2nd ODI, Match Prediction: Who will win the Match?

Will Windies play their best cricket to keep the series alive?

Its a quick turnaround for both the teams. Windies tried to make a meal of a meagre total of 195 runs but it was never going to be enough against the full-strength Bangladesh side. The visitors though will take heart from the fact that they managed to pick five wickets of the opposition and didn’t let them canter to victory. An improved performance is expected from them after bottling up an excellent chance to bat first on a tough wicket.

The Tigers, on the other hand, produced a near-perfect performance in the series opener. Their senior players delivered and dominated the game right through. Having said that, they would have been happier if the top-order had done the job. Their batsmen are still not getting to the terms and against the better teams, will mostly struggle like it was evident in the Asia Cup. The top three need to make the most of this series to regain their confidence.

The second ODI of the three-match series will be played at the same venue in Dhaka. With the Bangladesh captain insisting on a similar kind of track, expect the scoring to be tough once again. The temperature will hover in the late 20s with humidity set to take its toll on the players, especially the Caribbean side.

Why change the winning combination after a clinical game with series up for grabs? Bangladesh have no reason to tweak the playing XI. Though they will hope for the likes of Tamim Iqbal and Imrul Kayes to be among runs after getting out early in a not so steep chase. Mashrafe Mortaza led from the front with the ball and would be keen to do it but even he lamented poor death bowling in the previous match and Rubel Hossain would be expected to come up with more variations and better figures.

Well, it is the other way around for the Windies. They don’t have many options to tinker with and it will be hard on the players to be dropped after just one game. The same group might take the field on Tuesday and the senior players like Marlon Samuels and Darren Bravo should make it count now. Shai Hope is the promising batsman and will look to play through the innings while Shimron Hetmyer should give himself sometime before going against the bowling.

The bowlers were spot on in the first match but didn’t have many runs to play with. They will hope for a better effort from their batters and then expect to exploit the conditions well.

The prediction is for Bangladesh to win the game and seal the series with one match to go. 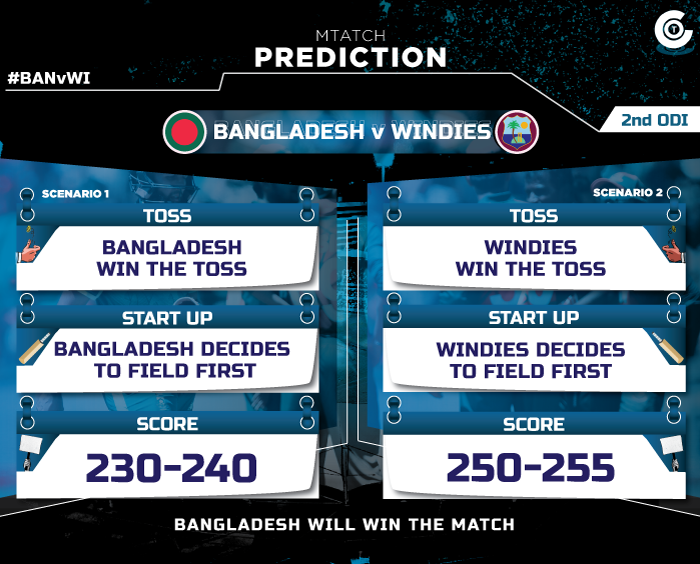 Get the latest Cricket News and updates from Bangladesh vs Windies series, Match Predictions, Fantasy Cricket Tips and lots more on CricTracker.com.