Bangladesh vs Windies, 3rd T20I, Match Prediction: Who will win the match?

Bangladesh vs Windies, 3rd T20I, Match Prediction: Who will win the match?

The toss is expected to play an important part in the crunch match.

After getting thumped against Windies in Sylhet, Bangladesh made a stupendous comeback in the second T20I at Sher-E-Bangla National Stadium in Dhaka where they won by 36 runs. The Tigers’ captain Shakib Al Hasan turned out to be too hot to handle for the Caribbean team as he inflicted mayhem in the opposition camp, first with a quick-fire 42 off 26 balls and then with a five-wicket haul.

The Windies, on the contrary, were caught off-guard in all the departments. Even as Shai Hope has simply been exceptional for them throughout, the rest of their batters need to step up. To add to Windies’ woes, their bowlers failed to keep the batsmen in check the other night. It goes without saying that captain Carlos Brathaste has a tough task ahead of helping his team win the three-match series.

The pitch isn’t expected to show much mercy to the bowling units and we could be in for another run-churning spree. But Shakib, in the last encounter showed that even bowlers can succeed on batting-friendly strips. Dew is almost certain to play a part and hence, batting would be easier in the second half of the deciding encounter. Both teams would, therefore, want to bowl first after winning the toss.

Tamim Iqbal and Liton Das are the opening batsmen with the left-hander Soumya Sarkar to follow. Mushfiqur Rahim would want to make amends for a couple of failures. The onus would again be on Shakib and Mahmudullah to inspire the team with both bat and ball. Mustafizur, Saifuddin and Abu Hider are the fast bowlers with Mehidy Hasan Miraz being the specialist spinner.

The Windies may rope in Khary Pierre in place of Darren Bravo, who has been awfully out of form. Evin Lewis and Shai Hope form the opening combination with the left-handed duo of Pooran and Hetmyer to bat at three and four respectively. Rovman Powell is the next man in with the all-rounders- skipper Carlos Brathwaite and Fabian Allen to follow. Paul, Cottrel, and Thomas as the pacers.

The prediction is for the team batting second to win the deciding encounter. 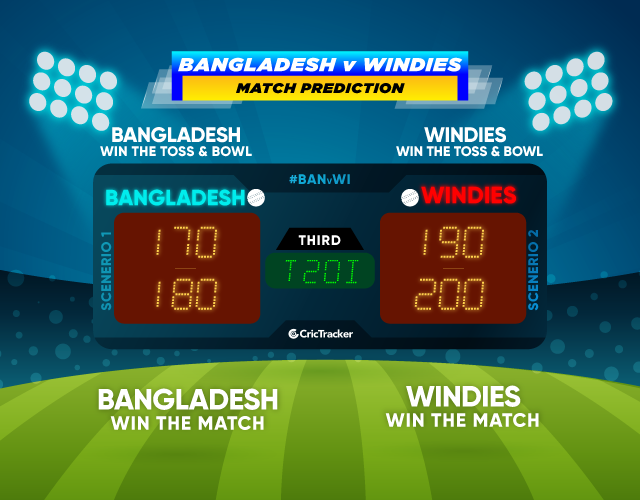