The Scorchers are languishing at the seventh position in the points table.

Match 17 of the ongoing Big Bash League (BBL) will see the Perth Scorchers travelling to Syndey to face the Thunder at the Showground Stadium. The Scorchers are not having the best of times this season and are languishing at the seventh position in the points table while the Thunder are also blowing hot and cold with 50 percent winnings in four matches. Both the teams lost their respective previous encounters and are in need of some inspiration as the tournament is moving fast.

The team led by Shane Watson lost to the Strikers on the last day of 2018 despite looking good throughout the chase. They are struggling in the middle-order with a player like Joe Root not standing up to the promise. Also the youngster Jason Sangha hasn’t stepped up after a brilliant start to the season and a serious batting improvement is needed for the Thunder in their first game of 2019.

The Scorchers are in even more flux compared to their opponents coming into this game. Their batting has been lacklustre, to say the least, in all the four matches and even the return of Cameron Bancroft didn’t add much depth. Though their exceptional pace attack has been toiling hard to keep them in the hunt and the onus will be once again on them to start the year on a winning note.

Only one game has taken place at the venue this season and the target of 170 was tough to chase. The spinners come into the later in the game which might lead to the teams batting first after winning the toss. The temperatures will hover around 25 to 27 Degrees Celsius. It is expected to get cloudy late in the evening but as of now, there are no chances of rain.

The Thunder have named an unchanged 13-man squad for this game. They are banking a lot on spinners this season which has yielded mixed results so far. But four spinners was a little to ambitious in Adelaide in the previous game and Gurinder Sandhu might get a nod ahead of either Jono Cook or Arjun Nair. The rest of the line-up remains the same with Jos Buttler and Shane Watson in great form. They need Ferguson and Root to be more consistent though in order to dominate.

Daniel Sams has already been one of the finds of the season with the spin troika of Fawad Ahmed, Cook and Chris Green has troubled the opposition.

The Scorchers are likely to persist with the same playing XI from the last game. They don’t have many options either. The likes of Bancroft, Michael Klinger and Hilton Cartwright along with the captain Ashton Turner have to play well. Their bowling attack comprising of Richardson, Coulter-Nile, Andrew Tye, Behrendorff and Willey are one of the best while Ashton Agar is the utility all-rounder. 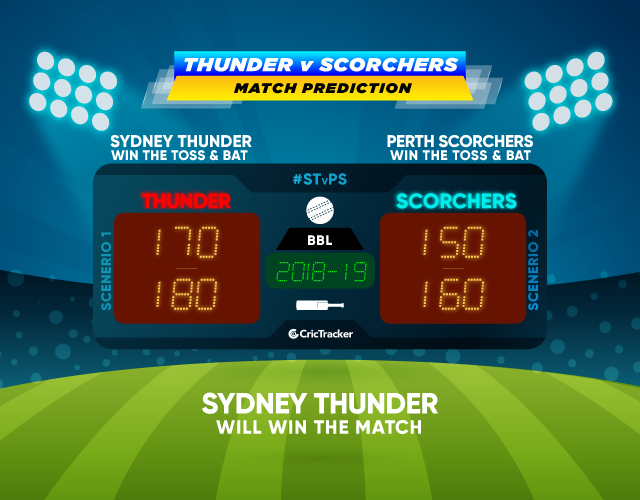 Get the latest Cricket News and updates from, Match Predictions, Fantasy Cricket Tips and lots more on CricTracker.com.