The Adelaide Strikers might dominate the Melbourne Renegades whose batting hasn’t come good this season.

The defending champions bounced back with a convincing win over the Sydney Thunder at home in the New Year’s Eve match in which they are yet to be beaten. This win came after back to back losses including a game in Perth where they were bundled out for just 88. They will now face the Melbourne Renegades in the first game of 2019. The Renegades are coming here on the back of two straight losses after consecutive wins to start the tournament. Their batting has failed to step up in all four matches.

The Strikers have the services of Rashid Khan who will remain with the team for the time being following the loss of his father on Sunday. However, they will be losing pacer Peter Siddle due to his commitments with the Australian Test team. Siddle, who picked up a 3-fer in the previous game, will be replaced by Wes Agar in the squad. The Renegades have included Joe Mennie in the squad for this game in place of Andrew Fekete.

The 18th match of the Big Bash League (BBL) will be played between Melbourne Renegades and Adelaide Strikers at the Simonds Stadium in Geelong.

The pitch in Geelong might not be any different to the ones BBL has produced in this season. We might be in for another low-scoring game based on how the games hosted by this venue turned out to be last season. The spinners and slow bowlers of the home team restricted the opposition to less than 120. As the game will be played on a track used for the WBBL game, once again, the spinners could be coming into the party.

Mohammad Nabi and Daniel Christian’s performances were the base of Renegades’ victories. Nabi scored 35 and 48* respectively and picked one wicket in the first two matches but aggregated only 14 runs in next two games with a wicket to his name. Christian bagged a 3-fer in the first match and made an unbeaten 49 in the next. He went wicketless in the previous two games scoring only 3 and 32 respectively. If both these players are little more consistent, the Renegades can win better.

Alex Carey has been quite an interesting player in this BBL season as the keeper has scored two fifties from four matches. In the two games where he didn’t, he was dismissed run out. Going by this, making Carey a captain/vice-captain will be fine unless he gets run out. Colin Ingram, Nabi, Christian and Rashid Khan will be other options and alternatives for multipliers. 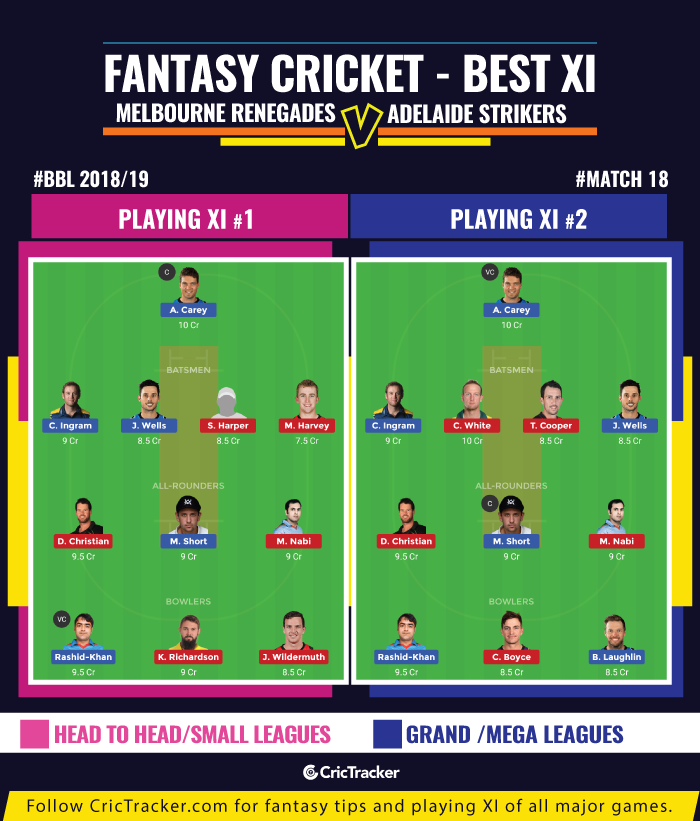 In the current form, both Sam Harper and Mackenzie Harvey are better prospects than Tom Cooper and Cameron White. The senior duo has failed to make a good score in all four matches while Harper and Harvey got starts but failed to convert them.

The Adelaide Strikers might dominate the Melbourne Renegades whose batting hasn’t come good this season.