Rashid Khan is set to play this match as well.

The high on confidence Adelaide Strikers will take on the Melbourne Renegades in the 18th match of the ongoing Big Bash League (BBL) on Thursday. The Renegades are struggling after starting with a couple of victories and now will be looking to avoid a hat-trick of losses. The Strikers continued their winning run in the year-ending matches by beating the Thunder and it remains to be seen if they will be consistent enough.

The team led by Tom Cooper, the Renegades, haven’t set the stage on fire so far and were completely undone by Marcus Stoinis in the Melbourne Derby the other day. They generally bank on their all-rounders to come good in both the departments and the time has come for the batsmen to take the responsibility. Usman Khan and Kane Richardson have also blown hot and cold so far.

The Strikers looked energetic at the Adelaide Oval. They need to display a similar kind of attitude going forward in the tournament. The team though will miss their Man of the Match from the previous game Peter Siddle who has joined the Australian Test squad ahead of the fourth Test against India. Wes Agar has been added to the squad while their trump card Rashid Khan hasn’t flown home yet and will play this encounter as well.

The only match played at the Geelong Stadium was a low-scoring affair which the Renegades won comfortably. Not many know how the pitch will play which will make the decision making difficult after winning the toss. The weather will be pleasant for the game of cricket with the temperature hovering in the early 20s.

The Renegades have included Joe Mennie in the squad for the game in place of Andrew Fekete. Kane Richardson has been highly inconsistent this season and might have to make way for Mennie. The rest of the line-up is likely to remain the same with Sam Harper and Mackenzie Harvey opening the innings while the experienced trio of Cameron White, Mohammad Nabi and Cooper will follow them.

Daniel Christian is in great form and will once again be crucial for the team. Cameron Boyce has quietly been doing his job so far conceding runs only at 6.56 per over. Jack Wildermuth and Usman Khan are the other pace bowlers who also have faded away after a bright start to the season.

Alex Carey is in great form for the Strikers while Jake Weatherald hasn’t scored many runs so far. This pair will continue to open the innings and the man in form Colin Ingram will bat at three. The main concern for them though will be the middle-order which is yet to perform to its potential and struggled to up the ante in the previous game. Rashid Khan will be part of the team for this game as well while Siddle will miss out. Cameron Valente or Wes Agar will come in place of him.

The prediction is for the Strikers to continue with their winning momentum. 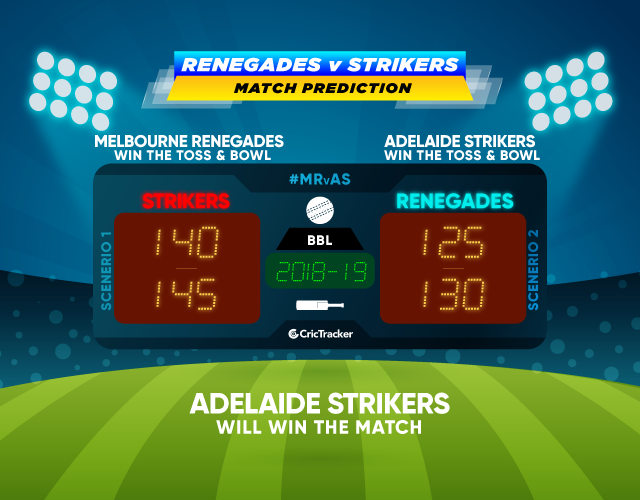